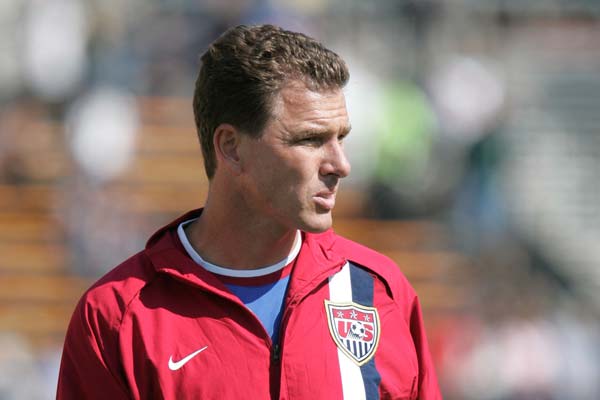 A ten-year veteran of the USMNT, Juergen Sommer’s agility and sheer physical stature combine to create a fearsome sight between the posts for opposition attackers at every level.

After earning 19 shutouts at Indiana between 1987 and 1990 and earning 1990 NCAA Adidas Goalkeeper of the Year honors, Sommer became the first American goalkeeper to pull a tour of duty in the mighty English Premiership, joining up with London outfit Queens Park Rangers in 1995 after short lower league spells with Brighton, Luton Town and Torquay.

His experience abroad and unflagging net minding abilities caught the eye of the powers that be in the USMNT camp, and the 6ft 6in keeper was included in the 1994 and 1998 World Cup sides after he served as an alternate under coach Bob Gansler in 1990.

In 2013, Indy Eleven announced that Sommer would coach the club in their expansion season in the North American Soccer League. He stayed with them until the summer of 2015.

2002: Split time in net (3-8-1, 2.39 GAA)  with Adin Brown leading the Revolution to the final of the 2002 MLS Cup. Retired at the end of the season.
2001: Spent a short training stint with Bolton Wanderers of England playing in an FA Cup game in February before returning to the New England Revolution of Major League Soccer.
2000: Signed with the  Revolution after recovering from a pair of major knee injuries.
1998: Began his MLS career with the Columbus Crew.
1995: Signed with Queens Park  Rangers, becoming the first American keeper to play in the English  Premiership.
1993: Named English goalkeeper of the year.
1993: Reached  the FA Cup semifinal with Luton Town at Wembley against Premiership powerhouse  Chelsea.
1991: Signed with English first division side Luton Town.