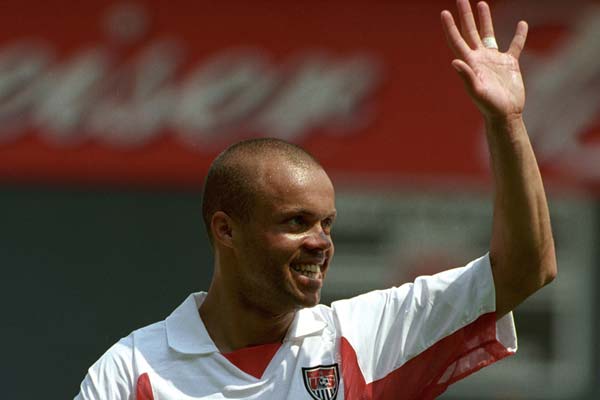 In United States soccer lore, midfielder Earnie Stewart stands as high as anybody. He is perhaps known best for his goal on June 22, 1994 that helped the U.S. beat Colombia in front of a home crowd and advance to the second round of the World Cup.

Stewart was known for his blazing speed and knack for scoring clutch goals. In 2001, the 32-year-old Stewart led the US in World Cup qualifying goals with five, more than twice as many as his nearest competitor. After an heroic performance at the 2002 World Cup, Stewart returned to the US from Holland to show off his wares for American fans on a weekly basis in MLS.

Stewart played for D.C. United for two seasons (2003-2004), winning an MLS Cup title in his second year with the club. Before retiring as a player, Stewart played one more season in Holland for VVV Venlo. At the close of the 2004-05 season, he joined the team’s front office as the Technical Director.  Stewart was elected to the National Soccer Hall of Fame in 2011.  He was technical director for Dutch club AZ Alkmaar from 2010 until leaving the job to become Philadelphia’s sporting director in January, 2016. He became the first general manager of the USMNT in the summer of 2018.

2005: Announced retirement from international and club soccer at the beginning of the year.
2004: Played four games, starting one of them.  He added on assist during the year.
2003: Played 13 games with seven of them being starts. Scored two goals.
2002: Started twice and appeared in four games for the U.S. at the World Cup, missing the Korea match due to injury.
2001: Named Honda Player of the Year after a successful World Cup qualifying campaign where he led the team with five goals and played every minute of every match.
2001: Became the national team’s all-time leading scorer in World Cup qualifiers.
2000: Scored three goals in CONCACAF World Cup qualifying.
1999: Helped the U.S. team capture third place in the 1999 FIFA Confederations Cup.
1998: Played in all three of the U.S. team’s 1998 World Cup matches.
1997: Helped the U.S. qualify for their third consecutive World Cup finals.
1996: Played in all but one of six World Cup qualifying matches.
1995: Won the 1995 U.S. Cup and advance to the semifinals of Copa America.
1994: Started in all four 1994 World Cup matches and scored the historic game-winning goal against Colombia at the Rose Bowl in Pasadena, California.
1993: Scored his first international goal in a 4-3 loss to Germany in the U.S. Cup.
1992: Played all three matches on the way to winning the 1992 U.S. Cup.
1990: Made international debut against Portugal on December 19, 1990.

Youth and college:  Stewart lived in the United States from 1971-77 in Point Loma, California, but did not play soccer in this country. Upon returning to his mother’s native Holland, he quickly picked up the game and lists the 1978 World Cup as one of his first soccer memories. It is no wonder that Stewart spent the majority of his youth playing the game in Holland. “There was no time for other things,” explained Stewart who now plays golf and tennis.

He attended MDGO-SB in Holland for his high school level education, but knew by the age of 17 that soccer would be his career. He credits legendary Dutch coach Jan Reker because “(he) taught me how to be a professional.”