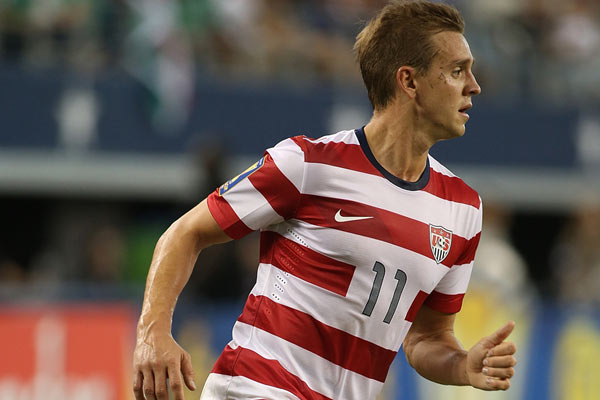 A native of Scotland, Stuart Holden moved to Texas when he was ten. A college standout at Clemson, Holden signed with Sunderland in the English Premier League. Holden never played for Sunderland after needing an extended recovery time for a fractured eye socket, the result of an assault outside of a Newcastle pub. Returning to the United States, Holden signed with Major League Soccer and was allocated to the Houston Dynamo for the 2006 season. Holden left MLS in January to sign with Bolton Wanderers in the English Premier League.

Holden was part of the Under-20 and Under-23 United States National Teams, playing in the 2008 Olympics. He won his first full international cap on July 4th, 2009 in a Gold Cup against Grenada. Holden scored on his debut. He was part of the Gold Cup winning squad in 2013. On February 3, 2015 Holden announced his retirement from professional soccer. Turning to broadcasting, he is Fox Sports’ lead soccer analyst.

2013: Returned to the team as a substitute during the May 29th game against Belgium. Subbed on in the second-half against Panama on Jun 11 and against Guatemala on Jul 5. Second-half sub against Belize in the Gold Cup on Jul 9 where he scored. Started against Cuba on Jul 13, Costa Rica on Jul 16, and the semifinal against Honduras on Jul 24. Started the final against Panama on Jul 28.
2010: Broke his leg in the March 3rd game against Holland.  Recovered in time to play in both Sendoff Series games and was named to the World Cup roster. Started both October friendlies.
2009: Scored two group stage goals against Grenada and Haiti as part of the Gold Cup squad. Named to the all-tournament team for the Gold Cup. Got his first World Cup Qualifying appearances in September. Appeared in both October Qualifiers. With the Dynamo exiting the playoffs in the Conference final, joined the National Team in time to start against Denmark on Nov 18th.

2012-13: Returned for Bolton on Jan 15th, spending April on loan to Sheffield Wednesday where he made four appearances.
2011-12: Played one game in the FA Cup for Bolton in September, missing the rest of the season with injury.
2010-11: Suffered a knee injury in March that cut his season short.
2009-10: Signed with Bolton in England.
2009: Regular with Houston. After his contract with MLS expired at the end of 2009, he joined Bolton Wanderers.
2008: Now a regular, named the US Soccer Humanitarian of the Year.
2007: Worked his way into the starting lineup with Houston, with ten starts and 22 appearances.
2006: Signed with the Houston Dynamo.  Made 13 appearances in his rookie MLS season.
2005: Signed with Sunderland.