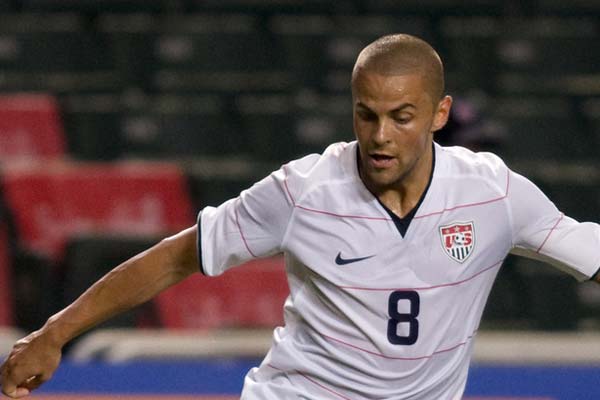 A Bradenton graduate in 2003, Danny Szetela spent three and a half years with the Columbus Crew before moving to Spanish club Racing de Santander in the summer of 2007. After a loan spell with Brescia, he returned to MLS with DC United midway through the 2009 season.

Summer 2007 also saw him hit the headlines with the USMNT U-20 team at the Canada World Cup. In tandem with a rampant Freddy Adu, he scored three goals in helping the team as far as the quarter-finals. Later in the year he made his full USMNT debut as part of a young roster called up by Bob Bradley for an exhibition match in Switzerland.

It wasn’t a bad debut at all. Szetela came late into the game with U20 team-mate Adu, and assisted on Michael Bradley’s game-winning goal in the 86th minute.

After leaving professional soccer in 2010, Szetela returned to the game as a member of the North American Soccer League’s New York Cosmos in the Fall of 2013. Stayed with the club when they joined the NPSL as Cosmos B in 2018.

2019: Won the North Atlantic conference, finishing runners-up.
2018: Moved to the NPSL with Cosmos B, finishing 1st in the region and losing in the regional finals.
2017: Runner-up with the Cosmos in their final season in the NASL.
2016: Finished the season with a championship as a member of the Cosmos. Joined SF Delta after the Cosmos ceased operations.
2015: Won the Spring championship with the Cosmos.
2014: Finished 2nd in the Spring and 5th in the Fall with the Cosmos.
2013: Joined the NY Cosmos in the NASL. Won the Fall championship.
2010: Left DC after four appearances.
2008-09: On loan to Brescia where he made 26 appearances and scored a goal.  Moved to DC United during the summer transfer window.  Had four appearances for DC in MLS play, five more in the CONCACAF Champions League.
2007: Moved from Columbus to Racing de Santander after making just six appearances (four starts) for the Crew.
2006: Injuries limited him to four games (three starts) for Columbus.  Registered one assist.
2005: Played 16 games (13 starts) for Columbus.  Registered one assist.
2004: Played ten games overall (four starts) in first season for the Crew.  Registered one assist.