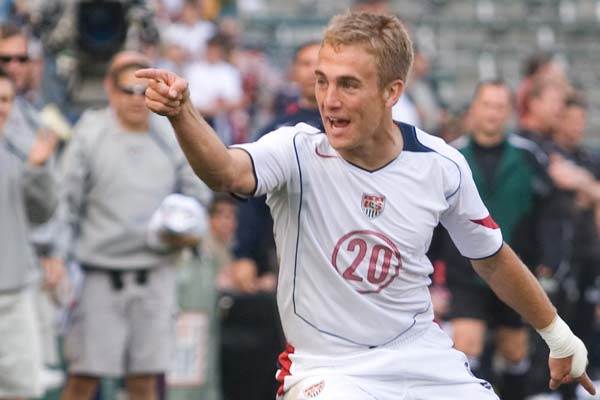 Taylor Twellman emerged as one of the top stars in MLS and the USMNT, scoring goals consistently over his first six seasons (2002-2005) with the New England Revolution. Twellman excelled in MLS thanks to an incredibly high work rate. His level of energy on the field has always impressed.

Like any target forward, Twellman could get the ball into the goal. He has a knack of showing up in the right place at the right time, and of scoring big goals in big games for his club. Unfortunately, the MLS Cup eluded him, finishing runner-up in four finals with the New England Revolution. In both 2006 and 2007 he scored the go-ahead goal for the Revolution, both times against the Houston Dynamo. Both times Houston came back to win the games.

While the 2005 MLS MVP did not make Bruce Arena’s 23-man USMNT roster for the 2006 World Cup, Twellman led the USMNT in scoring with four goals during the winter and spring of 2006.

After suffering a head injury in a game against the LA Galaxy on August 30th, 2008, Taylor was only able to make two substitute appearances in June of 2009 before announcing his retirement at the end of the 2010 season.  True to form, he scored in both of those games for his 100th and 101st career MLS goals.  Twellman is an advocate for post-concussion syndrome and athletes and spent part of the 2010 season as a color commentator on soccer broadcasts.

“You have no idea how far MLS has come since 2002 when I came in.  That is the hardest thing about my career being short.  I really wanted that chance to play in the Pacific Northwest (against the expansion Portland Timbers and Vancouver Whitecaps) and see the rivalries being formed there.  It is the beginning of something truly, truly special.  It really is making MLS and ESPN’s job easier on TV to sell such a great product when the crowds are like they are in soccer-specific stadiums.  I can’t wait to see this League in 2020.  Watch out NFL, MLB, NBA, and the NHL because here we come!”   from 10 Questions With… Taylor Twellman

By the 2014 World Cup, Twellman was an established presence on ESPN soccer broadcasts. Along with Ian Darke, Twellman became the voice for the USMNT. In June, 2014 he was part of a panel that met with US President Barack Obama to discuss concussion prevention and treatment.

2008: Called into January USMNT training camp. Played first half of 2-0 exhibition win over Sweden.
2007: Played ten games (five starts) for the USMNT, scoring in the Gold Cup game against El Salvador. Was also part of the Copa America roster, playing against both Argentina and Paraguay.
2006: Appeared in six matches for the USMNT, scoring a team-high four goals to go with three assists. Did not make Bruce Arena’s 23-man USMNT World Cup roster as one of the final cuts, and was named as an alternate.
2005: Saw action in five matches, starting in the USMNT’s final three qualifiers of 2005. Strove for his first goal with the full team, but some dubious officiating and near misses denied him until he finally notched against Panama, scoring the second goal in a 2-0 victory in the last qualifier of the campaign in front of his hometown fans.
2004: Played two games and added an assist for the USMNT. Against Mexico in April, Twellman’s header put goalkeeper Oswaldo Sanchez off balance, allowing Eddie Pope’s game-winner. In November, played first World Cup Qualifier, replacing Eddie Johnson in the 1-1 draw against Jamaica.
2003: Played five games for the USMNT, including a start in the 2-0 win over New Zealand.
2002: Started in his first USMNT call-up in the 2-0 win over El Salvador.
1999: On the US U-20 team, scored four goals in the World Youth Championship in Nigeria to earn the Bronze Ball as third leading scorer in the tournament.
1997: Scored twice against Austria in group play in the U-17 World Championship.

2010: After missing all of the 2010 MLS season, Twellman announced his retirement.
2009: Made two substitute appearances for the New England Revolution and scored in both games to bring his career MLS goals total to 101.  Missed the rest of the season with post-concussion issues after being placed on the disabled list on June 26th.
2008: Missed 14 games due to injury and suffered another head injury in an August 30th game against the LA Galaxy. Twellman would later learn he was suffering from post-concussion syndrome.
2007: Outstanding season for the New England Revolution, scoring 16 regular season goals, and then three more in the playoffs, including game-winners against New York and Chicago, the latter a spectacular overhead kick. Headed Revs into lead at MLS Cup, but they fell 2-1 to Houston.
2006: Another quality year with the Revs, this time winning the Eastern Conference. TT scored 14 goals overall (three in the playoffs), and registered five assists. Scored go-ahead goal against Houston late in extra-time at MLS Cup, but Dynamo equalized and then took the championship on PKs.
2005: A stellar year, winning the MLS MVP Award and the Golden Boot, scoring 17 goals (including six game-winners) and seven assists (two game winners). Voted to MLS Best XI for the second time.
2004: Fought through injuries and a scoring slump to finish second on the Revs in goalscoring with 11 strikes overall, including two goals in the playoffs.
2003: Led the Revolution in scoring with 15 goals and and four assists despite missing the end of the season with a broken foot.
2002: Scored 23 goals and won the league scoring championship with 52 points, and was nominated for MLS MVP after being selected number two overall in the draft.
2000-01: Played in over 40 matches for 1860 Munich’s reserve team.

Youth and college: Played two seasons at the University of Maryland, leading the Terrapins to the 1998 Final Four as a freshman. Played four sports at University High School in St. Louis, including basketball, baseball, and kicking for the football team.