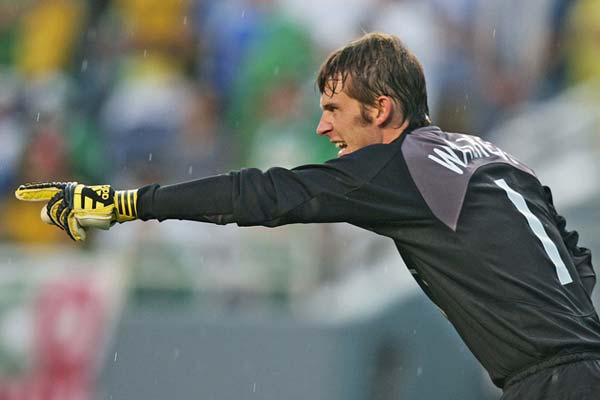 The first American player to establish a successful career in South America, Jonny Walker was an athletic and confident goalkeeper with vast experience in the Chilean First Division and Copa Libertadores. Walker signed with MLS and joined the MetroStars as a mid-season replacement for Tim Howard in 2003 and proved he belonged among the top American goalkeepers. Walker eventually saw time with the USMNT.

After spending four years in MLS, injury forced Walker to announce his retirement on January 26, 2007. In August of 2009, he was named goalkeeping coach for the women’s team at the University of Memphis.

“I was very young when I retired.  Goalkeepers actually get better in their 30s and I was only 28. I did consider myself a good professional, so giving up something you love is always difficult. The doctors told me that it wasn’t worth the risk. I’m lucky to still be involved in the game.” from 10 Questions With Jonny Walker

2004: Earned first cap for the USMNT on January 18th against Denmark (1-1) and recorded first shutout against Mexico on April 28 (1-0). Called into every camp, except one during the year. Back-up goalkeeper for every World Cup Qualifier except one.
1996: Member of the United States U-23 Residency Camp training for the 1996 Olympics.
1995: Member of U.S. team at World University Games that finished in ninth place.

2006: Missed the entire MLS season due to a torn disc in his back. Retired at the end of the season as a member of the Columbus Crew.
2005: Traded to the Columbus Crew mid-season.
2004: Played the full 90 minutes in the 28 games that he appeared in the MLS regular season. Also played the full 90 minutes in both legs of the Eastern Conference semifinal series against DC United. He recorded five shutouts on the season. Recorded his season-high eight save performance, which included a penalty kick save on 7/28 at KC. Underwent surgery in November for torn labrum and rotator cuff.
2003: Signed in July with the MetroStars and led the league with 0.95 GAA in 14 games. Helped the MetroStars reach final of US Open Cup, where they lost to Chicago.
2003: Runners up in Chilean Apertura National Tournament with Chilean powerhouse Colo Colo. Played one match in Copa Libertadores with Colo Colo and recorded a tie with Argentina’s Boca Juniors.
2002: Won Chilean Apertura national championship with Universidad Catolica (Spring Tournament). Captured U. Catolica record of consecutive shutout minutes with 708.
2002: Runners Up in Chilean Clausura national championship with U. Catolica (Fall Tournament). Played 8 matches in Copa Libertadores — voted best goalkeeper of round one of Copa Libertadores.
2001: Chilean Goalkeeper of the Year. Runners Up in Chilean national championship with U. Catolica. With Universidad Catolica became first Chilean team to go though to second round of Copa Mercosur. Played one match in Copa Libertadores and 6 matches in Copa Mercosur.
2000: Played 5 matches in Copa Mercosur.
1999: Runners Up in  Chilean national championship with U. Catolica. Played 5 matches in Copa  Mercosur.
1998: Started career in Chile with First Division Team Huachipato  on loan from U. Catolica.
1997: Captained the A-League Jacksonville  Cyclones
1996: Drafted to Dallas Burn and backed up 1996 Goalkeeper of the  year Mark Dodd
1992 – 1993: Played for Memphis Jackals of USL