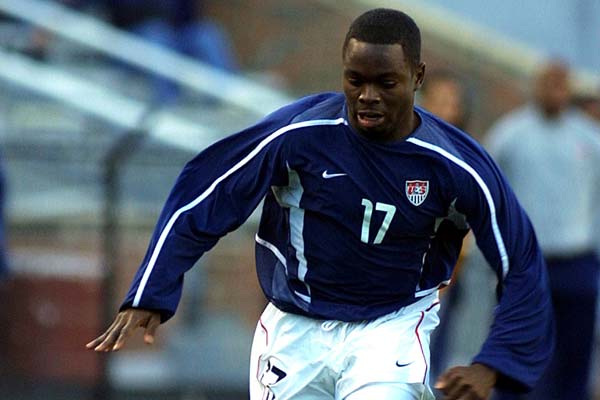 Brian West might feel as comfortable on a track as he does on a soccer pitch, as he was one of the fastest players in Major League Soccer. He was a rising star for the Columbus Crew forward where he played his way into the national team player pool. The short speedster earned his first cap less than three years into his professional career. In 2004, he left Columbus on a free transfer to Fredrikstead, in the Norwegian First Division. He spent four seasons in Norway, retiring in 2008.

2002: Made five substitute appearances including two in the Gold Cup.
2001: Played one match for the USMNT, a friendly against South Korea.
2000: Made his international debut against Russia on April 26, 2000.

2008: Retired as a member of Fredrikstad finishing with 53 appearances and 12 goals. Fredrikstad finished 2nd in West’s final season.
2007: Another 8th-place finish.
2006: Won Norway’s domestic cup with Fredrikstad, finishing 8th in the league.
2005: Finished 11 in the league.
2004: After contract ended with the Crew, signed a two-year deal with Fredrikstad FK in Norway. Tippeligaen’s first XI and was voted the team’s co-MVP by the club’s fans after the season. Helped FK avoid relegation, scoring four goals and adding eight assists during the season.
2003: Played 24 games for the Crew, starting 17 scored four goals and four assists in 1,543 minutes of play.
2002: Helped Crew secure their first Lamar Hunt U.S. Open Cup title.
2002: Scored one goal and eight assists in 24 games with Crew.
2001: Started 19 of 21 matches in his fourth season with the Columbus Crew.
2000: Set career highs in games (28), starts (24), goals (six) and assists (seven).
1999: Cracked the Crew’s starting lineup, starting 13 of 22 matches, scoring one goal.
1998: Assigned to Columbus Crew as a Project-40 player and made his professional debut at age 19.

College: A Parade All-American in high school, West scored 13 goals in two years at the University of Virginia. He set a freshmen record of 12 assists in his first year at Virginia.