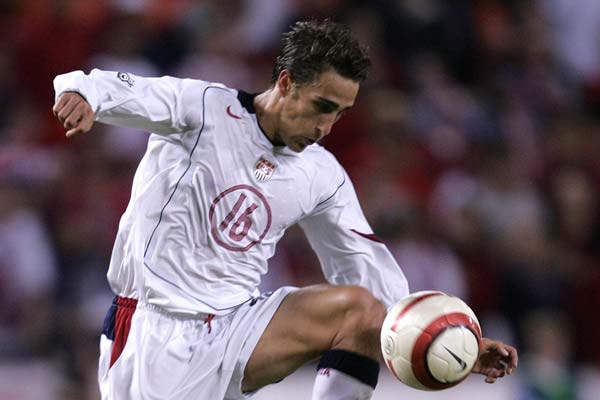 Josh Wolff was one of the fastest players in the United States professional ranks in the 2000s, with a strong shot and the ability to beat multiple defenders on his way to goal. His multidimensional play also encompassed an ability to pass into space and see routes develop that showed in MLS and at USMNT level. Wolff is a two-time World Cup veteran.

After spending his first nine years as a professional in Major League Soccer with the Chicago Fire and the Kansas City Wizards, Wolff signed with 1860 Munich of the German second division on December 6, 2006. He returned to Kansas City in 2008, signing with DC United for the 2010 MLS season. In 2012, DC announced that Wolff would serve as a player/assistant coach. In November, 2013 Wolff joined Columbus as an assistant coach. Wolff became assistant coach of the USMNT in Jan, 2019. In July, Austin FC announced he would be their head coach for their 2020 MLS expansion season.

2008: Started for the US on May 28th against England at Wembley.
2007: Made one start, playing in the 2-4 home defeat to Brazil in Chicago.
2006: Played in 10 matches for the US National Team.  Made one appearance for at the World Cup when he came on as a substitute against the Czech Republic on June 12.
2005: Made 10 appearances for the National Team, including the Gold Cup run.  Converted a penalty in the November 12 friendly against Scotland.
2004: Played eight games, six of them starts.  Scored one goal and added two assists. Scored the second goal in 3-2 victory in Grenada on June 20.
2003: Spent most of the year recovering from ACL surgery.
2002 :Appeared in two games at the 2002 World Cup, assisting on Landon Donovan’s goal against Mexico.  Set a career high in points with two goals and an assist in 5-0 rout of Jamaica on May 16.  Scored the game-winner in the Gold Cup against Costa Rica in a 2-0 win.
2001: Appeared in three World Cup qualifiers, scoring against Mexico on February 28 and against Costa Rica on April 25 before an injury kept him out of action until the final qualifier on November 11 against Trinidad & Tobago.
2000: Starred for the Olympic team that reached the semifinals.
2000: Played in the World Cup qualifier against Costa Rica with the senior squad on October 11, and scored his first international goal in a friendly against Mexico two weeks later.
1999: Earned his first cap against Jamaica on September 8.
1997: Played with the U-20s in the 1997 World Youth Championship in Malaysia.

2012: Served as player/assistant coach in DC, retiring as a player after the season.
2011: Traded to DC United. Scored five goals in 30 games.
2010: Started 16 the 25 games for Kansas City and scored two goals.
2009: Led Kansas City with a career-high 11 goals which was also 10th highest in MLS.
2008: Started and came off the bench for TSV 1860 Munich, who finished 10th in the 2.Bundesliga.
2007: Started season as an attacking midfielder, winning some good reviews for his performances in a rebuilt side. 1860 continue to be fringe candidates for promotion heading into the second half of the season.
2006: Scored five goals and registered two assists in 19 games (18 starts) for the Kansas City Wizards before signing with 1860 Munich in Germany in December. Had previously been offered a contract by England’s Derby County, but had played less than 75% od MNT games in previous two years, disqulaifying him from a UK work permit.
2005: Equaled previous year’s total of ten goals while adding a career-best ten assists. Led team in scoring and was named team MVP. Named MLS Player of the Week in mid-May after notching two goals topped by two assists in the 4-0 away win at Columbus.
2004: Scored 11 goals and eight assists in 30 games (29 starts) overall.
2003: After being traded to the Wizards, scored two goals and an assist in 14 games of an injury-plagued season.
2002: Scored five goals and five assists before suffering season-ended ACL tear.
2001: Only played three games for the Chicago Fire before a foot injury cost him the rest of the 2001 season and the playoffs.
2000: Played in 25 regular season games for the Fire before missing all but one playoff game due to National Team commitments.  He came on as a late substitute in the 2000 MLS Cup Final, whoch the Fire lost 1-0 to KC.
1999: Scored 10 goals in twenty-eight games with Chicago before tearing his ACL and missing six months of playing time.
1998: After spending much of the season with the Project 40 team, he was called into the regular Fire roster late in the season and scored eight goals in 14 regular season games.  He also played five games in the playoffs as part of the squad that won the MLS Cup and the US Open Cup. Drafted by the Chicago Fire as part of the Project 40 program. Played with the Project 40 team in the A-League for much of the season, netting 12 goals in 25 games.

Youth and college: Wolff scored 21 goals and registered eight assists in 43 games during his three years at the University of South Carolina and was named an Academic All American after his junior year.