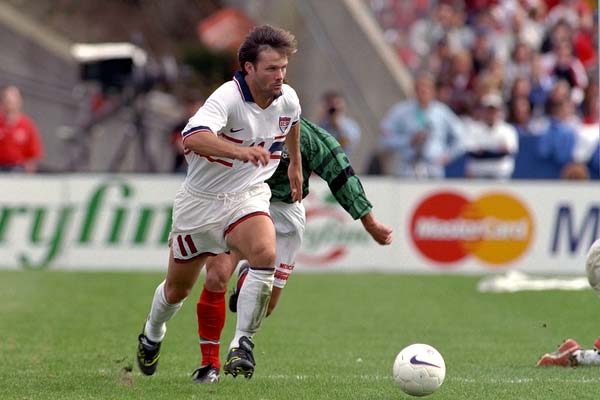 Eric Wynalda showed early and often what it means to be a goal scorer. A forward who held the record for most goals scored for the US, Eric Wynalda was a mainstay at the international level during the 1990s, earning the Honda Player of the Decade Award.

With an accurate shot and a good knowledge of the game, Wynalda was the first American-born player to play with a Bundesliga club, and he has the international experience and skill to find and exploit opposing teams’ weaknesses during the run of play, something he has displayed several times since joining Major League Soccer in 1996.  His game is as much about intelligence as power or skill, and very few American players are better at picking apart a defense or finding the net at crucial moments.

Wynalda moved into bradcasting after his playing career ended, spending several MLS seasons as a color commentator for ESPN and Fox Soccer Channel. He also served as the coach and technical director of the NASL’s Atlanta Silverbacks. Wynalda spent several seasons working for Fox as a commentator. He was the coach of the Las Vegas Lights from 2018 until June, 2020.

“I have always tried to be honest about everything. I hated when a new player came on the team and somebody would ask me about him and my only answer was he was a great guy – which means  ‘he’s not that good and I don’t want to say anything bad about my teammate.’ TV is different and you have to be honest or it doesn’t work. One of my friends once asked me what he had to do to get me to stop saying bad things about him on the broadcasts. I replied: ‘stop playing bad.'” from 10 Questions With Eric Wynalda

2003: Honored with star at the U.S. Soccer Star Plaza at Home Depot Center.
2000: Played in four matches with the national team, scoring against Haiti in the 2000 Gold Cup.
1999: Appeared in one game for the U.S., against Morocco, and scored his 33rd goal with the National Team.
1998: Played in two games in the 1998 World Cup.
1996: Named the U.S. Player of the Year for the second time after scoring nine goals in 13 games.
1995: Helped the U.S. make the semifinals of the 1995 Copa America and was named to the all-tournament team after scoring against Chile and Argentina.
1994: Played in seven full internationals, including all four World Cup matches, netting the key equalizer against Switzerland in the group stage.
1993: Scored twice during the 1993 Gold Cup.
1992: Scored five goals in seven games and was honored as the U.S. Player of the Year.
1991: Registered two goals and three assists over 15 games.
1990: Made his full international debut on February 2, 1990 against Costa Rica, and scored his first goal against Colombia on February 4, 1990. He played in 17 games including two group-stage matches during the 1990 World Cup in Italy.

2001: Played three games for the Revolution before being traded to the Chicago Fire on May 3, 2001.  He went on to lead the Fire in scoring with ten goals and five assists in 21 games.  He had one goal and one assist in the playoffs.
2000: Played in six games for the Fusion before being traded to the New England Revolution on July 8, 2000.  He scored one goal in six games for New England.
1999: Traded to the Fusion after spending the early part of the year on loan to Mexican club Leon, where he injured his knee.  He scored two goals in six games for the Fusion in 1999.
1998: In another season limited by injury, he scored six goals in 16 games for the San Jose Clash.
1997: Scored five goals in 14 games for San Jose before missing the bulk of the season due to injury.
1996: Signed with Major League Soccer and was allocated to the Clash, for whom he scored ten goals in 27 games in 1996, including the first goal in MLS history.
1995-96: Scored twice in seven games for German side Vfl Bochum.
1993-94: Scored 12 goals in 28 games for Bundesliga club FC Saarbruecken before transferring to Bochum for $850,000.
1992-93: Signed with Saarbruecken and scored in nine of his first ten games.
1990-92: Began his pro career with the San Francisco Blackhawks of the American Professional Soccer League.