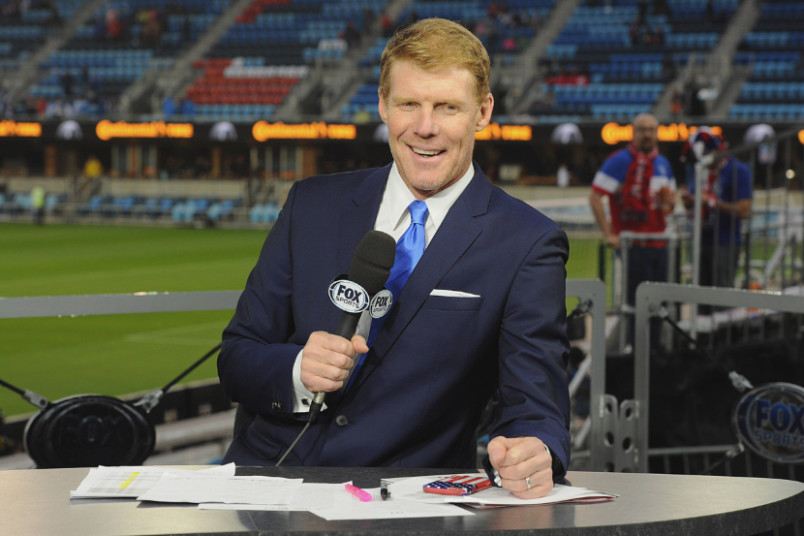 By Clemente Lisi – NEW YORK, NY (Oct 17, 2022) US Soccer Players – Known as one of the best defenders in National Team history, Alexi Lalas is now a no-nonsense commentator. Lalas has been a major part of the game’s growth in this country for the past three decades. His latest contribution will be working as a studio analyst for Fox Sports at next month’s World Cup.

Lalas, who played at the 1994 and ’98 World Cups, is preparing for Qatar 2022 by talking about the US’s chances of getting to the knockout round while also handicapping the rest of the 32-team field. Formerly at ESPN, Lalas joined Fox Sports in 2015 as lead analyst. He has worked several major events, including the Women’s World Cup and Copa America.

Excelling on both sides of the Atlantic as a player, after the success at USA ’94, Lalas signed with Serie A club Padova. Moving to MLS in 1996, Lalas played with the New England Revolution, NY/NJ MetroStars, Kansas City Wizards, and the LA Galaxy. Following his retirement in 2002, Lalas was appointed president and general manager of the San Jose Earthquakes and later the MetroStars and Galaxy. He was at the Galaxy in 2007 when David Beckham signed with the team.

Lalas has been a wonderful ambassador for the sport. That’s reflected in his election to the National Soccer Hall of Fame in 2006. As a broadcaster, Lalas has the distinction of being the first-ever soccer analyst to be nominated for a Sports Emmy for Outstanding Sports Personality in 2018.

We recently caught up with Lalas, where he discussed the MLS Cup Playoffs, his greatest World Cup memories, and who’s poised to win the whole thing in Qatar.

The MLS Cup Playoffs are finally here. Do you see either LAFC, the Supporters’ Shield winners, or Philadelphia Union, the team with the best record in the Eastern Conference, winning it all given how badly some teams with the best records in the league have fared in past playoffs?

From an LAFC perspective as Supporters’ Shield winners, history has not been kind. So, that does not bode well for them. It’s almost a poison chalice. Having said that, they won’t look at it like that. Philadelphia, obviously, will be very proud of the performance that they had relative to the amount of money LAFC spent on the glitz and glamour kind of thing as opposed to the more with less approach that kind of seems what (coach) Jim Curtain and Philadelphia do. Both of them can absolutely win MLS Cup. Both are stacked with talent. Both can score goals for fun. Both are pretty solid defensively and both have home-field advantage. I can make a case for either of them winning MLS Cup, but I have been around this league too long to know that it doesn’t always go as planned.

With less than a month to go before the World Cup, what do you think are the US’s chances of getting out of the group? How crucial will the game against England be?

I think getting out of the group, in terms of the order of games, actually sets up nicely for the US. While I think a lot of attention will be put on the England game, I think, quite honestly, that the crucial game is the first one against Wales. Not to put the eggs all in one basket, but the reality is that if you get points from that first game it takes pressure off that second game. This US team can beat England, they are beatable. The reality is this is an elite team when it comes to England and they can beat the United States. I don’t want to go into that second game without any points.

What’s your favorite World Cup memory as a player?

I’m talking to you because of the summer of 1994. It changed my life forever. It’s the power of what a World Cup can do to an individual and the opportunities on and off the field that it afforded me continue. That has to be the pinnacle if you will. It doesn’t seem that long ago even though it is.

Who’s your pick to win the World Cup? Some people, like your colleague Stu Holden, have picked Argentina. What say you?

It’s a good call, Argentina, because it’s an incredibly balanced team. They checked the box when they won the Copa America and took a burden off their shoulders. I think Brazil. I think they are stacked. Obviously, it’s not just about Neymar or the experience that they have or the history. They will really want to put on a show in Qatar.