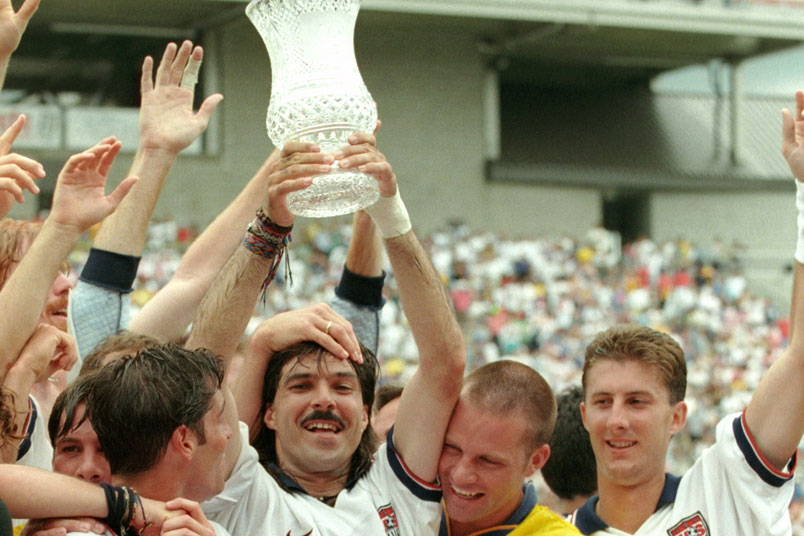 With 130 international appearances, Marcelo Balboa was the heart of the USMNT defense through most of the 1990s, earning the nickname Iron Man. He is one of only two players to win US Soccer’s Male Athlete of the Year award twice, and the Colorado Rapids veteran was honored for scoring the MLS Goal of the Year in 2000 for a brilliant bicycle kick against the Columbus Crew.

However, it is probably a bicycle kick that went just wide against Colombia in the 1994 World Cup for which Balboa is most recognized.  It may be fitting that he is known best for what he has done with the USMNT, a side the he often captained in the mid ’90s and competed with in three World Cups.

Balboa has continued his career in the game, working as a broadcaster and as soccer ambassador for the Colorado Rapids.  He was elected to The National Soccer Hall of Fame in 2005.

He served as the top analyst for ESPN/ABC during the 2006 World Cup, working alongside Dave O’Brien. Balboa currently works as a commentator on Univision broadcasts and coaches high school soccer in Colorado.

2002: Traded to the Metrostars in January for a third round draft pick. Retired after a single appearance with the MetroStars.
2001: Collected five goals and a career-high six assists, becoming the first defender in league history to notch 20 goals and 20 assists (24 goals, 23 assists) in a career
2000: Scored the Goal of the Year in MLS for a bicycle kick that found the net against Columbus.
2000: Was selected to the MLS All Star game for the fifth season in a row, though he only played in four of them as he missed the ’96 game due to injury.
1997: Led the Rapids to a second-place finish in the 1997 MLS Cup.
1996: Joined the Colorado Rapids in MLS’ inaugural year, scoring seven goals in just 18 games in a season that was marred by injury.
1996: Led Mexican First Division side Leon to the Mexican league playoffs.
1995: Signed with Leon and helped them stave off relegation.
1992: Won the American Professional Soccer League championship as a member of the Colorado Foxes.