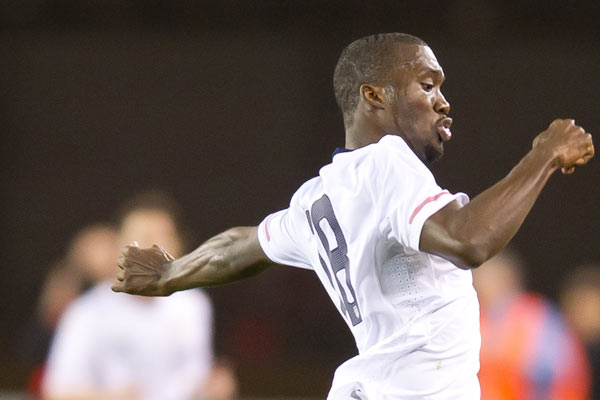 C.J. Sapong made his USMNT debut the year after he was drafted by Sporting Kansas City with the 10th overall pick in the 2011 MLS SuperDraft. He won the MLS Rookie of the Year award in 2011. The next season it was the MLS Cup. The year after that, the 2013 MLS Cup. With the USMNT, Sapong debuted on Jan 21, 2012 in a friendly against Venezuela. Sapong moved to Philadelphia in 2015. He rejoined the USMNT in the November 2017 international window. He moved to Chicago in 2019, joining Nashville in 2021.

2019: Moved to Chicago scoring 13 goals in 32 games and missing the playoffs.
2018: Played in 32 games and scored 4 goals in his final season with Philadelphia finishing 6th and exiting in the knockout round.
2017: 33 games and 16 goals in a breakout individual season for a Union team that missed the playoffs.
2016: 31 games with the Union, scoring seven goals, finishing 6th, and advancing to the conference semifinals.
2015: Played in 27 games and scored nine times in his first season in Philadelphia.
2014: Made 20 starts with Sporting.
2013: 21 games and 4 goals for Sporting KC in their MLS Cup winning season. Played 4 games on loan to Orlando City.
2012: Played in 31 games for Sporting KC scoring 9 goals. Won the U.S. Open Cup.
2011: Played in all 34 regular season games for Sporting KC in his rookie season, scoring 5 goals. Named MLS Rookie of the Year.