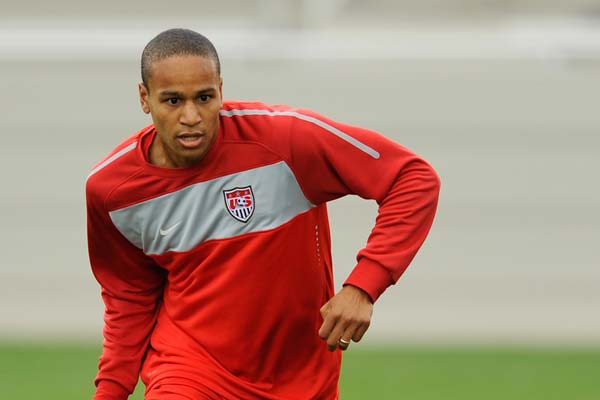 A defensive midfielder, Ricardo Clark left college early to start his professional career with the MetroStars, winning a starting job and showing the kind of athleticism that would become his trademark.  In 2005 he moved to the San Jose Earthquakes, the same year he won his first senior USMNT cap. He stayed with the franchise as it moved to Houston, winning two MLS Cups.

In 2007 he came on at half-time for the USMNT in the Gold Cup final with his country 1-0 down. Clark helped turn the game around into a 2-1 victory.  He also started all three games for the US in the 0-3 Copa America whitewash. His club season turned sour when he incurred a nine-game ban for kicking FC Dallas striker Carlos Ruiz as he lay on the ground, causing him to miss the entire playoff campaign and the Dynamo’s repeat MLS Cup success.

Clark joined Eintracht Frankfurt in January 2010.  He returned to Houston midway through the 2012 season before moving to Columbus as a free agent for 2018. Clark retired following the 2019 season.

2012: Subbed on against Venezuela on Jan 21st and scored in stoppage time for the 1-0 win. Started against Panama on Jan 25th.
2010: Named to the World Cup roster. Started against England and Ghana.
2009: Played in the 3-2 win over Sweden on January 24th and came on as a substitute in the Feb 11th Qualifier against Mexico.  Started against Honduras on June 6th.  Part of the Confederations Cup and Gold Cup squad. Started against Mexico on Aug 12th.  Scored the game’s only goal in the World Cup Qualifying win at Trinidad & Tobago in September.  Started against Denmark on Nov 18th.
2008: Called into January training camp, played full 90 against Sweden. Started 2-2 exhibition tie against Mexico in Houston, February 6.
2007: Gold Cup winner, making four appearances (one start), including the whole of the second half against Mexico in the final. Made three starts at the Copa America, and scored the sole US goal in 3-1 defeat by Paraguay.
2005: Earned his first cap against Panama on Oct. 12th.
2003: Part of the World Youth Championships squad.