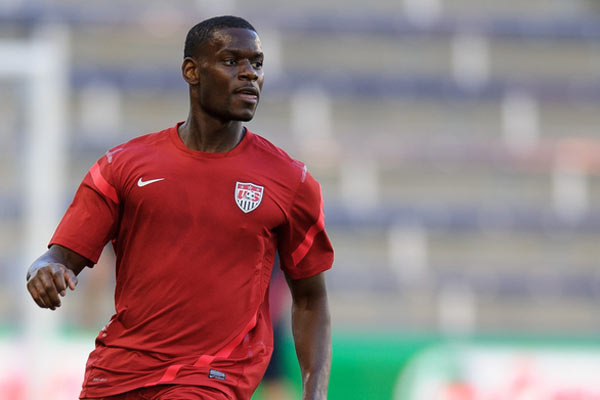 The MLS Rookie of the Year in 2007, Maurice Edu is a versatile midfielder who rose from playing college soccer with the Maryland Terps to his first start with the USMNT in less than a year. Although rugged defense is considered the strongest part of his game, he has the ability to steal forward and snatch vital goals.

Edu became national champion with the Maryland Terps in 2005, but left college a year early to be part of the 2007 MLS SuperDraft.  Picked up by expansion franchise Toronto FC, he established himself as one of the few consistent starters in the team’s losing season as they finished bottom of the Eastern Conference.

He was rewarded at the end of that season with his first senior USMNT cap, starting the exhibition game in Switzerland on October 17.  Not only did the US win 1-0, but Edu received rave reviews for a solid debut in difficult wet conditions on a poor playing surface.  He was just as solid in a win by the same scoreline in South Africa the following month.

Edu left MLS during the August ’08 transfer window, signing with Rangers in the Scottish Premier League and joining fellow US National Team player DaMarcus Beasley at the club.  By the 2011-12 season Edu was one of three National Teamers playing for Rangers.  He transferred to Stoke City in England’s Premier League for the 2012-13 season. Edu agreed to a one-year loan to return to MLS as a member of the Philadelphia Union for 2014. He made that move permanent prior to the 2015 MLS season. Edu announced his retirement on March 18, 2019.  He currently works as a commentator for CBS Sports.

2017: Missed the playoffs with Philadelphia, leaving the club at the end of the season.
2016: Missed the playoffs with the Union.
2015: In January, Edu made his move to Philadelphia permanent.
2013-14: Spent the first-half of the season with Stoke. Moved on loan to Philadelphia in Jan for the 2014 MLS season. Finished in 6th-place with Philadelphia, playing in 31 MLS games.
2013: Moved on loan to Bursaspor in January.
2011-12: With Rangers financial troubles forcing the club into administration, they were relegated to the Third Division by Scottish soccer’s leadership after finishing second in the Premier League.  Edu completed a transfer to Stoke City in August of 2012.
2010-11: Another Scottish Premier League title with Rangers.
2009-10: Returned from injury to lead Rangers over Celtic in the Old Firm derby. Part of SPL title winning squad as a regular.
2008: Left Toronto for Rangers, making his debut on September 13th against Kilmarnock.
2007: Named MLS Rookie of the Year.  Regular starter with Toronto FC, making 25 starts, scoring four goals, and registering one assist.

College: Three years with University of Maryland, winning NCAA national championship in 2005.  He started 55 games in his three years, and was a Hermann Trophy semifinalist in 2006, as well as a first team NSCAA All-American.