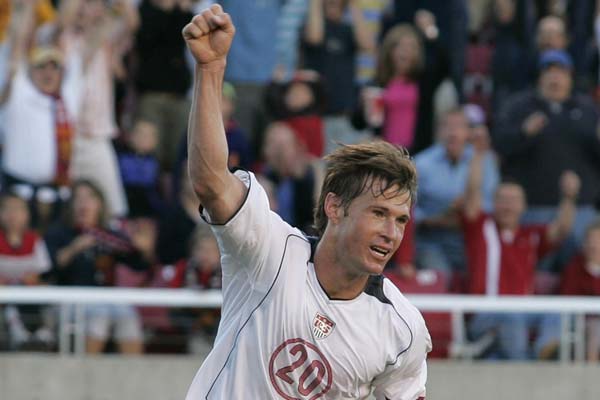 Perhaps the best player in the history of American soccer when it comes to headers, Brian McBride showed he could score at MLS, USMNT, and Premier League levels. McBride retired from the USMNT following the 2006 World Cup, but played for two more seasons with Fulham before returning home as a member of the Chicago Fire. He officially retired from soccer following the 2010 MLS season.

A scoring sensation with the Columbus Crew of Major League Soccer, McBride adapted to the international game with relative ease. The 6’1″ striker has scored in nearly one-third of his international matches and accounted for the only US goal at France ’98. McBride will forever be remembered in American soccer history as the first selection in the inaugural MLS Draft in 1996.

The only American to score in two different World Cups, he is also a hero at Preston North End and Everton for his two productive loan spells in England. Joining Fulham in 2004 showed England has learned what US soccer fans have known for years.

After making his third World Cup roster in 2006 and playing in all three of the games in Germany, McBride announced his retirement from international play in July of 2006. He ends his long career with the National Team ranking second on the team’s all-time goal-scoring and points lists, and is one of a select few players to see time in three different World Cups.

McBride returned to Major League Soccer in 2008 where he spent three season with the Chicago Fire before announcing his retirement at the end of 2010. Moving into commentary work, he is part of the studio team for Fox’s soccer broadcasts. He also runs McBride’s Attacking Soccer Academy. McBride won election to the National Soccer Hall of Fame in 2015.

2006: Started all three World Cup games, announcing his international retirement after the tournament. Hit the post in the final game against Ghana with the US 2-1 down.
2005: Scored three times in six final round qualifiers, including the game-winner against Trinidad & Tobago on Aug. 17 in Hartford. Played a total of seven games in 2005, including six as a starter.
2004: Only one of two players to appear in all eight World Cup Qualifiers. Surpassed Joe-Max Moore in all-time scoring chart on June 2, scoring two and being named man-of-the-match.  Played 11 games and scored three goals.
2003: Scored three goals and two assists in seven games for the National Team. Tallied twice in Gold Cup win over Martinique.
2002: Started all five games for the US at the World Cup, scoring goals against Portugal and Mexico.  Assisted on both of Clint Mathis’ goals in a 4-0 win over Honduras. Named to the Gold Cup Best XI after starting all five games and scoring four goals at the Gold Cup, helping the US to its first title since 1991.
2001: Injuries limited playing time during World Cup qualifying campaign. Started in the final-round opener against Mexico, a 2-0 victory for the US.
2000: Scored the lone goal in a 1-0 victory over Guatemala at RFK Stadium in Washington DC.
1999: Scored two goals for the US on the way to third place in the 1999 FIFA Confederations Cup.
1998: Netted the lone American goal in the 1998 World Cup in a 2-1 defeat by Iran.
1997: Scored two goals in the final round of World Cup qualifying.
1996: Registered two goals in the second round of World Cup qualifying, including a key goal against Costa Rica. Scored his first international goal in November against Guatemala.
1993: Made his international debut against Honduras on March 25.

2010: Retired at the end of the season, scoring his 80th MLS regular season goal in his final game.
2009: Scored six goals in a season where the Fire failed to make the playoffs.
2008: Returned to Major League Soccer as a member of the Chicago Fire playing in his furst game on August 16th.
2007-08: Made just three appearances for Fulham before a ruptured thigh muscle ruled him out for three months. Returned to the squad to help pull them out of the relegation zone with three crucial wins to end the season.  Announced he was leaving Fulham and returning to MLS on May 28th.
2006-07: 38 games and nine goals for Fulham as the team just avoided the drop.
2005-06: Played in all 20 of Fulham’s league games to open the 2005-06 campaign, starting 18.  Scored eight goals in all competitions, leading Fulham’s offensive output.
2004-05: Saw action in 17 of 20 League games.  Three goals in first half of the year, all League Cup games.
2004: Signed a two and a half year contract with Fulham of the English Premier League with a million dollar transfer fee.
2003: Led Columbus in scoring with 12 goals and three assists in 24 games (23 starts).  Loaned to Everton of the English Premier League where he scored four goals.
2002: Led Crew to their first US Open Cup trophy, scored seven goals and five assists in 19 league and playoff games.
2001: Spent time with English First Division side Preston North End. Scored one goal and six assists in 15 games (14 starts) with Crew.
2000: Missed significant time with a fractured cheekbone but still recorded six goals and five assists in 18 games (17 starts).
1999: Helped the Crew reach Major League Soccer’s Eastern Conference Finals.  Five goals and 12 assists in 30 starts overall.
1998: Scored 14 goals and seven assists in 29 starts overall, despite missing time for the World Cup and other National Team games.
1997: Scored seven goals and seven assists in 17 regular season and post-season games.
1996: Scored a career-best 19 goals in his first MLS season.  Was the first overall selection by Columbus in the first MLS draft.
1995: Played with German Second Division side VfL Wolfsburg.

High School and College:  A product of the suburban Chicago soccer system, McBride is the all-time leading scorer for the University of St. Louis.