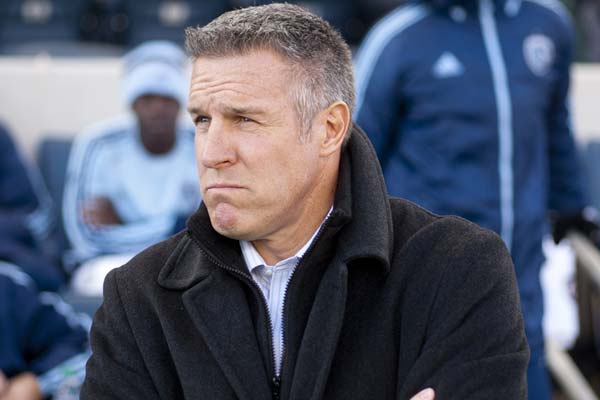 Peter Vermes’ career proves that stumbling blocks aren’t necessarily an end point. After spending his early career as an offensive player for Rutgers, and European clubs Volendam and Figueras, and the US National Team, Vermes joined Major League Soccer in 1996. Though a quality player, his career wasn’t advancing as expected.

A trade from the Metrostars to Colorado and ultimately Kansas City had Vermes shifting to the defense. In the process, he became one of the best defenders in MLS history.

Partnering with his National Team keeper Tony Meola, Vermes turned in an MLS Defender of the Year performance in 2000, setting the standard for MLS defenders with a Kansas City squad that would go onto win that year’s MLS Cup and be remembered as one of the most skilled teams in League history.

Vermes served as a staff coach for the U-20 National Team, then coached by Sigi Schmid. He also served on the US Soccer Federation’s Board of Directors, Executive Committee, and chaired the Athlete Council.

On November 15, 2006, Vermes was named as the Technical Director for the  Kansas City Wizards. He remains in that position while also serving as the head coach of the renamed Sporting Kansas City. He won election to the National Soccer Hall of Fame in 2013.

1997: Earned his final cap in a World Cup Qualifier against El Salvador on Nov. 16th.
1992-93: Appeared in 21 games for the National Team, starting 18.
1991: Started 12 games, scoring against Uruguay and recording back-to-back goals against Costa Rica and Mexico on July 3rd and 5th. Part of the Gold Cup winning squad.
1990: Started all three games in Italia ’90.
1989: Played in five World Cup Qualifiers, including the Nov. 19th game against Trinidad & Tobago that clinched qualifying. Won bronze medal with the US futsal team.
1988: Earned his first cap against Colombia on May 14th. Member of the US Olympic Team. Named US Soccer Male Athlete of the Year and Olympic Player of the Year.

2002: Last season in Major League Soccer.
2000: Traded to the Wizards on Feb. 3rd. Won the MLS Cup with Kansas  City. Named MLS Defender of the Year and MLS Best XI.
1997-99: Member of the Colorado Rapids, reaching the 1997 MLS Cup final after finishing fourth in the Western Conference.
1996: Member of the Metrostars.
1995: Played for the USISL’s New York Fever on loan after signing with Major League  Soccer.
1991-95: Member of Figueras in the Spanish second division.
1990:  Member of FC Volendam in the Dutch first division.
1989: Member of Raba Eto in the Hungarian first division.

Youth and College: Vermes grew up in the soccer hotbed of New Jersey, attending and starring for Rutgers University where he was runner-up for National Player of the Year and an All-American.