From the beginning the US National Soccer Team Players have been committed to serving the American soccer community.  In 2003, the Players Association founded the Time In program, a way to directly honor those fighting leukemia and other blood cancers, diseases that claim the lives of more children than any other.

The Time In program was inspired by the story of young Jackson Alea, a brave child who fought leukemia until he could fight no longer.  With the help of their friends at the United States National Soccer Hall of Fame, the US National Soccer Team players made Time In permanent by engraving the names of Time In honorees on the Hall of Fame’s Walk of Fame in Oneonta, NY.  In the Fall of 2003, the Hall of Fame hosted the families of the Time In honorees for a Time In induction ceremony at the Hall. 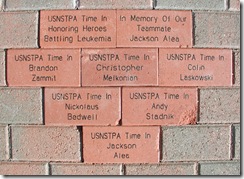 On July 8th, 2003 the US National Soccer Team Players Association and the National Soccer Hall of Fame established the Time In section of the Soccer Hall’s Walk of Fame to honor those battling leukemia and other blood related cancers.

Time In is a program that tells the stories of those children who have lived with leukemia, the number one disease killer of children.

This joint project will create a lasting memorial to those children that we have lost to Leukemia, while honoring those fighting the disease. The section will contain two marker bricks, the first identifying the section as “USNSTPA Time In – Honoring Heroes – Battling Leukemia.” The second marker brick will honor the motivation for the Time In program “In Memory Of – Our Teammate – Jackson Alea.” Each new brick will contain the name of a Time In honoree.

Speaking for the US National Soccer Team Players Association, Acting Executive Director Mark Levinstein described the Walk of Fame program: “As we said when launching the Time In Program, the players believe that the brave children with blood cancers who do not lose their dignity but fight until the fight is won or until they can fight no longer are the true heroes whose stories should be told. The Players would like to thank the National Soccer Hall of Fame for supporting their efforts on and off the field and would encourage any fan to make the trip to Oneonta.”

Speaking for the National Soccer Hall of Fame, Will Lunn, President/CEO, stated, “We are honored to be a part of the US National Soccer Team Players Association program to recognize these special soccer players. The National Soccer Museum is full of stories about challenges, some met and overcome, while others were too great. However, none of those challenges are equal to the ones these young people face. This display will serve to place sport in its proper context.”

The name Time In is taken from the story of Jackson Alea, a Tennessee boy who didn’t let his illness stop him from enjoying soccer.  It is in Jackson’s honor that the Players Association created the “Time In” program, and invites the friends and families of those who have lost a loved one to leukemia, lymphoma, or other blood-related cancers, as well as those battling the diseases to share their stories.

If you have a Time In candidate, please contact us