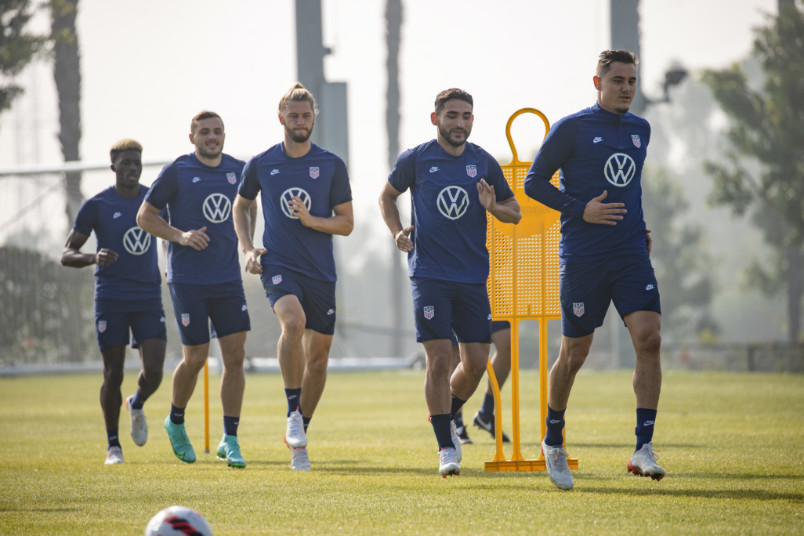 By Jason Davis – WASHINGTON, DC (Jan 12, 2022) US Soccer Players – The USMNT’s January camp includes two players fighting against bad timing. In December, Seattle Sounders forward Jordan Morris and New York Red Bulls defender Aaron Long returned to the squad and are now part of the group training in Phoenix in advance of the next round of qualifiers. Both were in line to be major contributors in the World Cup qualifying campaign, only to suffer injuries before the Octagonal began.

Now, they’re working towards playing a part in qualifying where options and cover are at a premium. The three-match window, five substitutions, and the continuing impact of the pandemic stretch even the deepest rosters. That’s the case without the injury and availability issues every team faces. What that creates are opportunities for players returning from lengthy layoffs.

While players have stepped into roles for Gregg Berhalter’s squad during this qualifying cycle, the two remaining windows promise more of what we’ve already seen. Players inserting themselves into those roles when needed to make a difference.

That’s good news for Morris and Long as well as the USMNT. Part of the point of these camps is to keep players in shape for potential World Cup qualifying duty. That’s a unique setting for December and now January, with a clear goal to get into the games that count starting at the end of the month.

Morris is ahead of Long in his recovery. Following the injury to his anterior cruciate ligament in his left knee, Morris rehabbed for the bulk of the 2021 season. His return to the field came in the 33rd game for the Sounders, just ahead of the MLS Cup playoffs. That beat expectations for his recovery, getting back into Brian Schmetzer’s team well ahead of the original prognosis. It might have helped that he already had experience recovering from the same injury in his right knee in 2018.

That timeline speaks to Morris’s work ethic and commitment to the task. Though he probably needed no more motivation than getting back to his club team, Morris also focused on rejoining the USMNT. Getting back with the group as soon as possible would improve his chances of making a mark in 2022 and claiming a spot in the World Cup squad.

“On the plane ride down, I was working on my goal sheets for this year and next year, just trying to bring some positivity into things,” Morris said at the Carson-based camp in December. “Part of my goals this year was trying to get back on the field before the season ended and get back into a national team camp before next year. Throughout all my recovery and everything I would go back to those and say this was my goal.”

Morris appeared in his second USMNT match of 2021, the December friendly against Bosnia and Herzegovina. Just making the lineup represented an achievement, regardless of his performance. In a game featuring a domestically-based squad short on experience, Morris’s presence lifted the group.

Keep in mind that Morris is 27 and will be 28 by the time the World Cup starts in November of 2022. Following the failure of the United States to qualify for the World Cup in 2018, players of his generation are anxious to reach the final stage of global soccer’s biggest competition.

The same is true for Long, a late-bloomer who will be 30 when Qatar 2022 rolls around. This World Cup represents the best chance for both players to reach the pinnacle of their sport. That’s what makes the timing of their injuries so difficult.

Unlike Morris, Long didn’t get playing time late in the MLS season or December. The Achilles tendon injury he suffered in May of 2021 sidelined him just as long as Morris’s knee injury did him. Because of the timing, it pushed Long’s recovery past the end of the 2021 MLS season.

Berhalter brought Long into the USMNT camp for a pair of October qualifiers to aid in his comeback. With MLS and the Red Bulls out-of-season, the USMNT boss knew that Long needed every chance to engage in high-level training if he was going to be a factor this year.

The invitation to Cincinnati in October was purely about training for Long. The December camp was the next step, even though the defender didn’t dress for the game against Bosnia. With January here, Long is still on the road to full fitness.

“His progression from Cincinnati to December to now has been right in line,” Berhalter said about Long on Monday. “He’s doing a good job for us. It’s about having fit players, having guys in rhythm available. I’m not sure he’s going to get there but hopefully, he will be close. He goes back to preseason with his team, and he can play games there in the start of the season, and hopefully March we’re having different conversations.”

At the peak of his powers, Long is an elite MLS defender with a chance to continue his career abroad. His journey from midfield prospect to MLS Defender of the Year and US international is an incredible, inspirational story that speaks to the pathways still available in American soccer to players who mature later in their careers.

Long wouldn’t be the first player with a great story and the talent to shine on the biggest stage to miss out on a World Cup, but this would hurt a little more. Everyone knows that things can change on a dime in any team, but it doesn’t feel like that long ago that Long was ready to ascend to USMNT starter in the most important games the team would play in 2021. Instead, he enters 2022 working against the clock.

Timing is everything when it comes to injuries and the World Cup. For Morris and Long, injuries robbed them of a year to build into 2022. If they’re going to reach their goal of making it to Qatar, they might have just enough time left to do it.