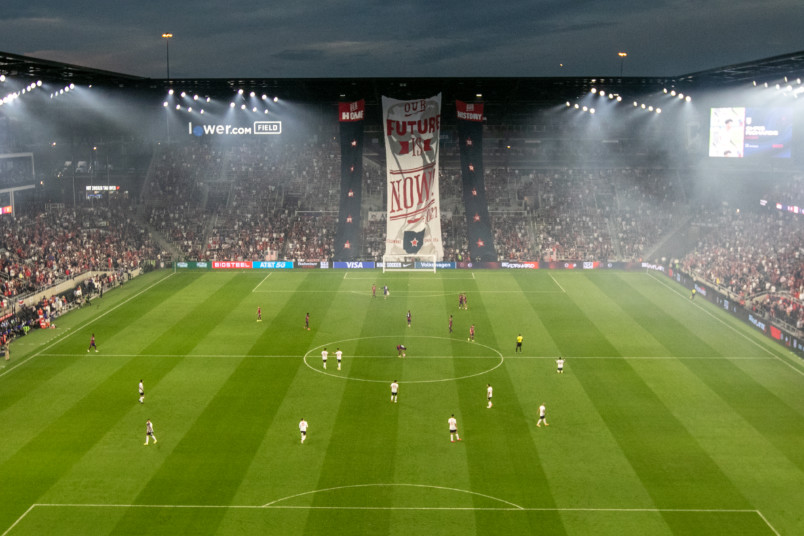 By Clemente Lisi – NEW YORK, NY (Jan 24, 2022) US Soccer Players – When the United States defeated Mexico in World Cup Qualifying, the 2-0 win was very familiar. What wasn’t familiar was the venue. Instead of Columbus, the US won in another Ohio city with a rabid fan base and MLS franchise. Cincinnati’s TQL Stadium proved to be a wonderful place for such a key match.

The US, however, returns to Columbus on Thursday to take on El Salvador at Lower.com Field. Holding the game there matters because it shows that Columbus can still make the difference for a USMNT looking to reach the 2022 World Cup. As the United States prepares to play El Salvador, there are many reasons why Columbus remains important during World Cup Qualifying. That said, normally, the USMNT wouldn’t be playing a game that counts in late January, much less in a cold weather city.

“We expect to embrace the conditions, enjoy the conditions and really be able to take it to our opponents,” US coach Gregg Berhalter told reporters during a Zoom news conference last Friday. “In the big picture of this window, we are hoping to position ourselves to qualify for the World Cup.”

This will be the second time the US plays at Lower.com Field during this World Cup Qualifying cycle. They beat Costa Rica 2-1 there during the October window, renewing a tradition in the city. The USMNT’s all-time record in Columbus is 9-1-3 overall and 8-1-2 in World Cup Qualifying. The eight victories during Qualifying are the most of any American city.

Moving with the Crew to its new stadium, it’s an intimate and intimidating environment for visiting teams. Opened just last year, the venue replaced Historic Crew Stadium. Built in 1999, Crew Stadium was the first soccer-specific stadium constructed by an MLS club. That started the era of soccer-specificity, an ancillary benefit spilling over to the USMNT during major games. As a result, Columbus has hosted 11 World Cup Qualifiers since 2000.

“As demonstrated this past October, Columbus has time and time again, proven the ability to create an electric atmosphere, providing the United States with a significant home-field advantage,” said Columbus Crew President and General Manager Tim Bezbatchenko. “We’re grateful for the opportunity to host US Soccer and again showcase the world-class facilities in Columbus.”

The US played four games in Columbus against Mexico that ended 2-0 in their favor. It was where the “dos a cero” chant and “La Guerra Fria” moniker was born to help the US close the gap with their southern neighbors over the last two decades. That streak in Columbus ended in November 2016 when Mexico emerged victorious 2-1.

Current Crew defender Josh Williams, an Ohio native, was at that first US-Mexico game back in 2001 at Crew Stadium, watching from the stands as a fan. “That match was what made me kind of fall in love with American soccer, truly fall in love with it,” he told ESPN.com in 2020.

The match against El Salvador marks the first time that the two will play in Columbus. The National Team enters the game as favorites against a side coached by USMNT alum Hugo Perez. Then there’s the weather. Columbus should have a high of 24 degrees and a low of nine on Thursday. That means creating conditions for Concacaf opponents that are unbearable. This has worked for the USMNT in the past, as well as for Canada during this recent cycle, both in Columbus and in other US cities that experience tough winters.

Berhalter said succeeding in the cold is a case of “mind over matter” and that both the USA’s European-based and MLS players are used to such weather.

“All the times we go down to Central America and we’re playing in the humidity and the heat and sometimes the smog and the altitude… this is an opportunity for us to gain an advantage on our opponents,” Berhalter added.

This type of gamesmanship typifies Concacaf soccer more so than any other confederation on the planet. Mexico, for example, has employed similar strategies over the decades. Hosting games at the Estadio Azteca, where the high altitude and blistering heat make it very difficult for any opponent, has always been part of their World Cup Qualifying success.

US Soccer figured out long ago that home-field advantage and bad weather can favor the National Team. It’s a two-decade tradition that endures in many cities, with Columbus remaining squarely in the center of it all.