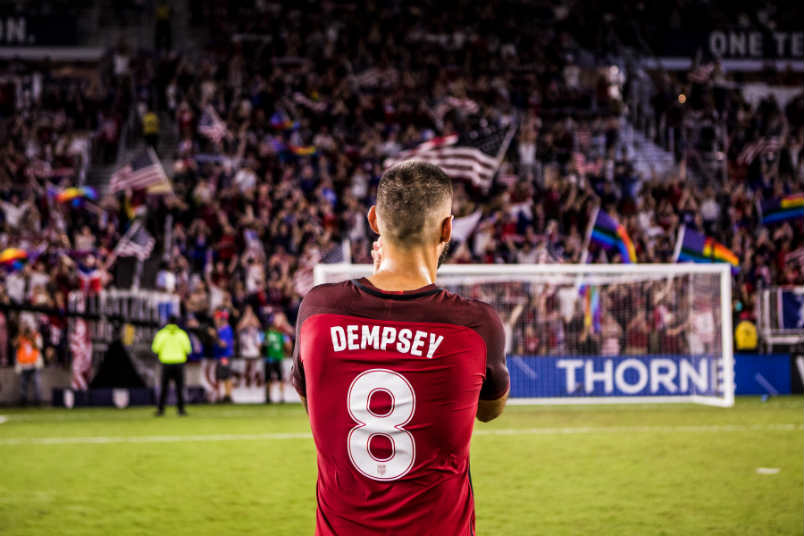 By Charles Boehm – WASHINGTON, DC (May 19, 2022) US Soccer Players – He was one of modern American soccer’s first superstars, a thrilling attacker who reached the sport’s biggest stages and crossed over into the country’s mainstream consciousness like few ever have. The basic facts and stats of Clint Dempsey’s professional career are historic in and of themselves: MLS champion, four-time All-Star, English Premier League stardom, three-time World Cup standout, all-time co-leading USMNT goalscorer, and more. His life’s journey, though, the long, steep path he took just to reach those levels, has become the stuff of legend.

Most readers will know it well. Dempsey rose from a blue-collar background in little Nacogdoches, Texas, building his skills in dusty pickup games and Latino men’s leagues, taking on the six-hour round trip to the Dallas area to play the best possible competition as a teenager. That it actually worked seems somehow even more incredible a few more years in retrospect, as he returns to Texas this weekend to be enshrined in the National Soccer Hall of Fame.

“I mean, the goal as a kid, what you prayed about, was just represent your country, try to play in a World Cup. That was what I dreamed about and prayed about,” Dempsey recalled in a Monday media availability. “But realistically, it was trying to get to college, trying to get a college scholarship, because that’s what all the driving was about. That was the game plan, and from there kind of see what happened. It wasn’t until I probably got into college, and seeing other players who have played with going pro, that I was like, I can do this, this is a real possibility. It’s just whether or not I get that opportunity, and when I got that opportunity, just make the most of it. I feel like I did.”

That last part is well beyond doubt. From the Dallas Texans youth club to Furman University to the New England Revolution, then on to Fulham, Tottenham Hotspur, and a groundbreaking Stateside return with the Seattle Sounders, Dempsey’s career was a sequence of challenges and leaps. A race against time to see just how far he could go before the clock ran out.

“Playing in Hispanic leagues, playing men’s leagues, shaped me. Because you get elbowed, you get pushed down, you got to be tough,” he said on Monday. “I always wanted to prove myself and test myself and if I get knocked down, I’m going to get back up. That was always my mentality. I think I was blessed to grow up in that environment that I was. I look back on some of those times as what made me tough.”

There was a rare sort of hunger to him that both reflected his origins and set his course, and deeply endeared him to fans.

“Those long drives going to Dallas to try to get the best coaching that I could get and play around the best players that I could be playing against to improve myself, that was sacrifices. That was long hours on the road that my parents would make to give me that opportunity so I could have that platform,” said Dempsey. “So I guess just never take anything for granted. And it also kind of gave me that chip on my shoulder that I was always having to prove myself, and nothing was ever easy. But it’s what gave me peace in the end also, because it made everything that much better when it all worked out.”

Dempsey’s adventures also took him into some of the brightest, and sometimes harshest, spotlights that any US player has ever experienced. His second MLS stint marked a new era as the league finally opened up to domestic talents earning big Designated Player contracts. On Monday Dempsey spoke of that long-running dance with fame.

“I felt like when I first came into the league, I was more open. I was more showing people my personality,” said Dempsey. “It was also a situation of trying to figure out, alright, you want to make the most of it, you got to take care of your family. Whether it’s soccer or whether it’s doing something else, you were just always kind of like open for the challenge. And then as you get older and then you start making more money and then the more pressure comes along with the role that you have, it’s almost like the opposite. I became more reclusive, didn’t want to bring too much drama, that would add even more to the pressure and expectations of what you were trying to do. So especially my last years, probably playing with Seattle and with the national team, I was probably boring to talk to.”

A sudden diagnosis of an irregular heartbeat in 2016 threatened his career. When he called time on his playing days two years later, Dempsey sounded intent on leaving the public eye for good, for a private life in a quiet corner of North Carolina. In recent months he’s softened that stance, finding fulfillment from a part-time role as a studio analyst for CBS Sports, including its coverage of USMNT matches.

“It wasn’t til after playing that you kind of had this freedom – you have the pressure to perform whether you’re being an analyst or doing something else. But it wasn’t the same kind of pressure that I felt by being a Designated Player and always needing to play at the highest level possible and if things didn’t work out, I was the one being blamed,” he said. “Then also throwing into the fact that the two heart procedures that I had towards the end were limiting me in terms of my performances and what I could put out there on the field. So now being an analyst, it just feels like you’re a little bit more free. But at the same time, it’s exciting because I get to talk about what I’m passionate about, which is the US team and wanting them to win and kind of what I see.”

Dempsey’s tale is compelling not just for his personal triumphs and contributions for club and country. It also holds up a mirror to the United States’ soccer landscape in revealing ways. The Latino environments that shaped his style and mentality remain disconnected from many of our soccer institutions and developmental pathways. While the pay-for-play system that forced his family to seek donations to cover the costs of a call-up to the Olympic Development Program has evolved, its fundamentals, and flaws, persist. The debates over playing in MLS vs venturing abroad rumble on.

The man who will walk across that stage in Frisco, Texas on Saturday epitomizes the American soccer story like few others in our time. Along with the goals, glory, and grins, that too is part of Clint Dempsey’s legacy.