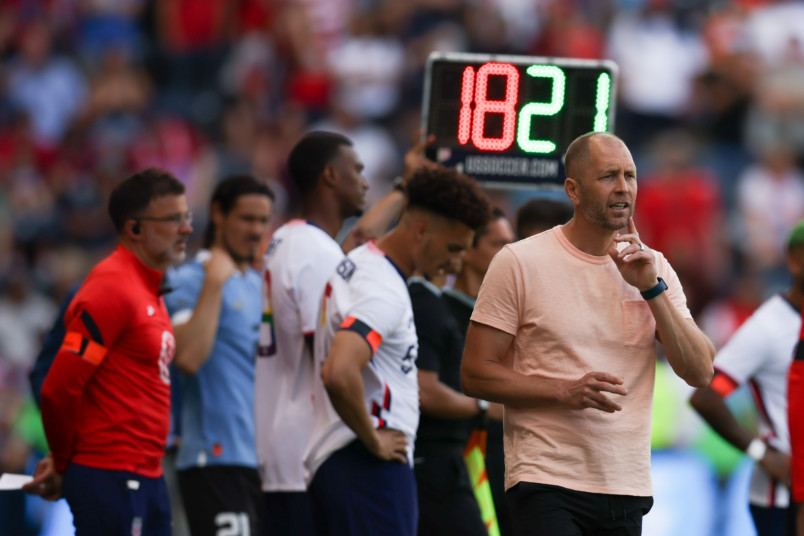 By J Hutcherson (Jun 14, 2022) US Soccer Players – On Monday, the International Football Association Board officially made five substitutes an option for any “top level competition,” along with increasing the bench from 12 to 15 players. Neither of these moves were exactly surprising, but they underline issues for the contemporary game. In an era where players, officials, pundits, and fans are asking about fixture congestion, increasing substitutes and benches is at least part of an answer. Then there’s what it means tactically.

We’ve seen enough from the early returns of the five substitutes era to make more than an educated guess here. It can be disruptive, restructuring lineups that need to keep more of a shape. It can also be crucial, allowing coaches to make three subs tactically without worrying about keeping one in their pocket in case of injury. That alone has restructured strategies and planning. How couldn’t it?

At the same time, having two more subs restructures matchday squads. It also resets long-term thinking about how clubs spend to craft their squads. For national teams, it reworks depth charts and expectations.

It also somewhat addresses in-game fatigue. With that, it’s a partial answer to a very specific question. There’s still the grind of so many games, especially for top players also representing their countries. Success for club and country means more games, competitive and from the touring season.

The concept may seem simple here. Stop adding games. Reduction across competitions for club and country is the obvious reaction. That’s what this really becomes. It’s over-committing players across competitions, with clubs and national teams deciding for themselves when to lessen the load. The USMNT used two rosters last summer for the Nations League and Gold Cup. This summer, Mexico decided to give some of their regulars more of a break by not leaving them in the squad for their Nations League games. At club level, it’s fielding weaker sides in some competitions. For all involved, these are not easy decisions. There’s a strong argument that they also shouldn’t be necessary.

Getting to a fair use of players for club and country isn’t soccer’s only big picture problem, but it’s a part of the whole. It’s not that there’s an unwillingness to fundamentally restructure the calendar. FIFA spent months shopping a plan for fundamentally reorganizing the calendar. It’s more of finding a reasonable way to move the sport forward.

What’s at risk is the stratification of the elite level of soccer and everything else. It’s turned into a cliche of sorts, but it’s probably true that no one would design professional soccer the way it currently exists. Multiple tournaments and leagues for club and country, friendly tours, and so on create justifiable ways to fill a calendar. Arguing both tradition and opportunity, more becomes acceptable. Sooner than later, revamping and expanding competitions add even more games.

It’s easy to point at any expanded or new tournament as problematic, but that misses the wider scope. The Champions League revamp is designed to address the issues that created the potential for a super club breakaway. The Nations League does more than do away with so many friendlies. It also obligates national teams to participate rather than sitting out all or part of international windows. Concacaf has stressed how important that is across the confederation, and that’s worth underlining. There’s more involved than just what may work for the top teams.

UEFA also made that resonate in Europe by adding the Europa Conference League. While some have taken issue with the Nations League filling up the June window, 2022 is another one-off. There’s not going to be another November/December World Cup, returning summer soccer to at least a version of its regular schedule. FIFA’s revamped Club World Cup is still in process, adding another tournament that by design obligates the best teams in the world.

Regardless of what FIFA does or doesn’t do with the international calendar, we may already be seeing the pragmatic response to so many obligations. Clubs and countries using roster rotations may become more of the norm. Player recruitment in leagues using five substitutes adjusts by naming rosters where all five substitutes expect to see the field. That’s more or less the situation already, a new normal under the temporary rules now becoming permanent.