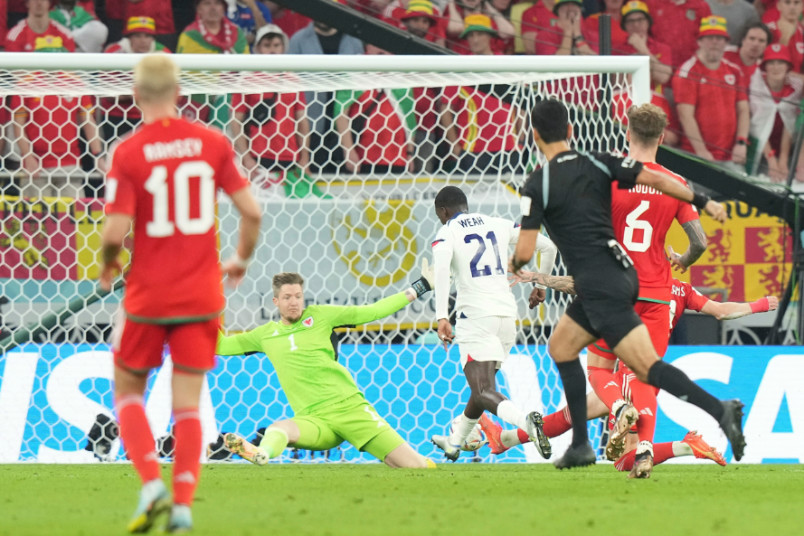 By Jason Davis – WASHINGTON, DC (Nov 23, 2022) US Soccer Players – Over the first few days of the 2022 FIFA World Cup, the most definitive performance so far by the final score was England’s 6-2 win over Iran in group B. The United States gets the challenge of England on Friday, and there’s no denying that the Americans face a stiff defensive test in game two of the group stage. Still, there are hints from England’s win over Iran and the USMNT’s draw with Wales that the Americans can threaten the Three Lions.

First, we should address the goals England conceded to Iran. Game state is valuable context, so it’s worth pointing out that England might have played differently if not for the already comfortable score line. At the same time, Iran’s opener is important when looking at England’s defense.

England was already up 4-0 when Iran found the net through Mehdi Taremi. After Iran slipped England’s pressure against the right touchline, Ali Gholizadeh played Taremi into space behind England’s defense. Taremi, an excellent finisher, put a first-time shot into the top of the net.

Taremi’s goal highlighted a change in strategy for England vs Iran. Against a team expected to bunker, England manager Gareth Southgate moved away from his usual three-man defensive setup to a four-man back line. While a net gain of one defender on paper, with the fullbacks often up the field, the move takes a center back off the field and shifts responsibility to two central players.

Removing a defender wasn’t likely to hurt England because they would dominate possession. If England scored first, it would force Iran to push higher in search of an equalizer. That would open up more space and leave fewer organized defenders for Iran to slow down English attacks. Iran conceded the initiative, gave up one goal that soon became two, three, and on and never recovered.

England shouldn’t expect to be able to control possession the same way against the United States. The Americans are capable of using the ball for long stretches and won’t let England dictate the game without a fight. Gregg Berhalter’s system isn’t exclusively about possession, but the USMNT coach does prioritize creating cracks in the opponent’s defense on the ball more than off it.

The Americans aim to be the team that can score the way Iran did against England. They’ll try to use the wide areas of the field to pull the opponent apart, then opening up space inside for a Taremi-style goal. There should be chances to do that work, whether Southgate chooses to deploy two center backs or three.

Also worth considering is the US goal against Wales. England will have to build from the back and attempt to play through and around the American midfield. Harry Kane is crucial to that work as the key distributor for his side. As of this writing, his status for Friday is unclear after he picked up an ankle injury against Iran. If he’s on the field, he’ll spark English attacks with his hold-up play, passing, and off-the-ball runs.

With England looking for gaps in the American formation, there will be chances to recover the ball and move quickly into the attacking phase of the game. In the group stage opener, the USMNT used winning the ball off of a Welsh goal kick to find forward Josh Sargent at midfield with his back to the goal. Sargent, doing the same work that Kane does for England, knocked the ball down for Christian Pulisic.

At that moment is when the Americans’ quick-strike ability came into play. Tim Weah’s recognition of space and Wales’ vulnerability presented Pulisic with an opportunity to set up his teammate for a breakaway chance on goal. Weah used speed to beat his marker to the ball, then guile to slide it past the goalkeeper.

The US caught Wales out by wasting no time in springing the move toward the goal. Sargent dropped the ball to Pulisic’s feet with Pulisic facing the Wales goal and able to see Weah set off on his run. The Welsh collapsed on Pulisic because of the threat he poses dribbling the ball, and it unlocked the space for Weah to score.

That can be done again. England should struggle to keep up with the Americans if similar opportunities present themselves, particularly if England’s fullbacks are pushed up. The Americans should have their share of possession and will work their way into the penalty area or dangerous crossing opportunities with long passing sequences, but the transition moments are ripe for more goals like the one they scored against Wales.