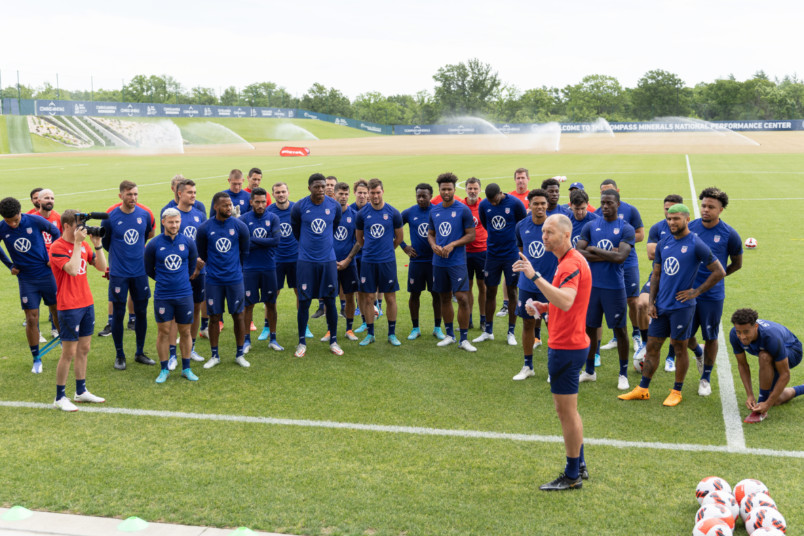 By Charles Boehm – WASHINGTON, DC (Dec 30, 2022) US Soccer Players – Setbacks and breakthroughs in both familiar settings and faraway lands. Tribulation, tragedy, and triumph on the field and off it. Steady, hard-earned growth, exhilarating new frontiers, and sobering reminders of well-established challenges. The US National Teams lived a spectrum of experiences and emotions in 2022.

As is so often the case, those who care about the sport in this region have reason to look toward the future even as the year’s end provides a moment to process what’s unfolded.

For the USMNT, 2022 brought the conclusion of one of the most unusual World Cup cycles in the program’s modern history. Not only did the tournament itself take place in Northern Hemisphere autumn for the first time ever, the Yanks’ qualification path began much later than usual thanks to the COVID-19 pandemic, with nearly half of the Concacaf Octagonal schedule in the same year as the World Cup.

The group that Gregg Berhalter kept reminding us, with good reason, was the youngest national team in the world shook off the ghosts of the past to navigate this rocky road successfully. In a grind that lasted until the final day, the Yanks booked their spot despite a litany of injuries and other challenges, building on the Concacaf Nations League and Gold Cup trophies won in 2021. There’s always satisfaction in good results vs the old southern rival. Taking four points from six in the WCQ meetings with Mexico certainly counts as that.

An unexpected adversary rose in the north, however, to outrace both those established powers to first place in the Ocho table, though. After decades of underachievement, Canada’s men made a dramatic resurgence in ’22. Les Rouges racked up a fierce 6-0-1 home record in the final round, helped by the timing of the compressed calendar that required several cold weather fixture windows. Their place in the FIFA World Rankings had already required six additional games of the confederation’s preliminary rounds as well.

All that good work didn’t translate into World Cup success for Canada. Like Mexico and Costa Rica, John Herdman’s team was unable to find a way past rugged group-stage adversaries in Qatar. That left the United States to carry the North American banner into the knockout rounds alone. The Yanks produced an admirable overall performance in Qatar, going undefeated in Group B play to book passage to the round of 16 before falling to the Netherlands.

From the jump, Berhalter and his squad maintained that they were in Doha to win, not just make a good account of themselves or prepare for the next tournament on home turf in 2026. The pain after the 3-1 loss to the Dutch at Khalifa International Stadium was tangible. Yet observers could quickly place the tournament run into wider context. A group made almost entirely of World Cup rookies had climbed into the ranks of the top 16 teams in the world, playing proactive soccer along the way. Conversely, the stiff challenge encountered in the knockout phases underlined the work that lies ahead.

The prospect of that core maturing and growing even further fuels big dreams about ’26. So does the progress made at youth level. The US men’s program’s persistent frustrations at Olympic level was vanquished by a vibrant Under-20 side that rolled to a Concacaf title in dominant fashion. Two goals conceded in a 2-2 group-stage draw with Canada were the only ones they would give up in seven matches at that tournament in Honduras.

Concacaf’s new format meant this qualified the United States for not just the U-20 World Cup but also the 2024 Olympics in France. It’s just the second such Summer Games expedition since the turn of the century. That will be a highly valuable experience for all involved, especially with a deepening YNT player pool and in all likelihood no qualification process for the 2026 World Cup.

Now the US women take center stage. In July, the USWNT qualified for the 2023 Women’s World Cup in style, scoring 13 goals and allowing none. The U-20 and U-17 women were similarly authoritative in their regional qualifying tournaments, though their subsequent World Cup campaigns highlighted a rising tide of global competitiveness. An expanded WWC with 32 participants and welcoming settings in New Zealand and Australia stands to give that growth a bigger stage.

World champs for seven years running, the USWNT will again be the focus when they defend their title next summer. In addition to the cruise to WWC qualification, Coach Vlatko Andonovski’s squad won the annual SheBelieves Cup it hosts in the spring, setting off a 13-game winning streak.

It speaks volumes that even finishing ’22 with a 14-3-1 record wasn’t necessarily smooth sailing. Those three losses arrived back-to-back in friendlies vs European elites England, Spain, and Germany, giving the USWNT something to prove in the months leading up to the WWC. If the past is any indicator, mainstream America will watch closely, a spotlight that stands to further broaden the sport’s profile and appeal.

In some ways 2022 felt like the end of the beginning for the national teams at large, a step towards something even bigger around the corner. Even the means by which most fans watch their teams is in flux. US Soccer is about to embark on a dramatically different broadcasting model via a long-term national teams partnership with Warner Bros Discovery Sports in which streaming on the HBO Max platform features prominently. MLS will undergo a similar shift with a 10-year deal with Apple.

More painful reminders of the passage of time arrived in the year’s final weeks. The unexpected passing of respected journalist Grant Wahl at the World Cup stunned the soccer community. Then the losses of NASL-era writer Alex Yannis, influential MLS executive Kevin Payne, and all-time legend Pele inflicted further grief and introspection. The sport of the future has a past worth prizing, too.

World Cup years inevitably prompt variations on the old ‘when will soccer make it in this country?’ discourse among some quarters of the mainstream media. Record viewership numbers, rising quality on the pitch, and signs of meaningful crossover appeal in 2022 offer evidence that the question was settled long ago. Yet they also point to the lofty ceilings that could give us new and even bigger answers.