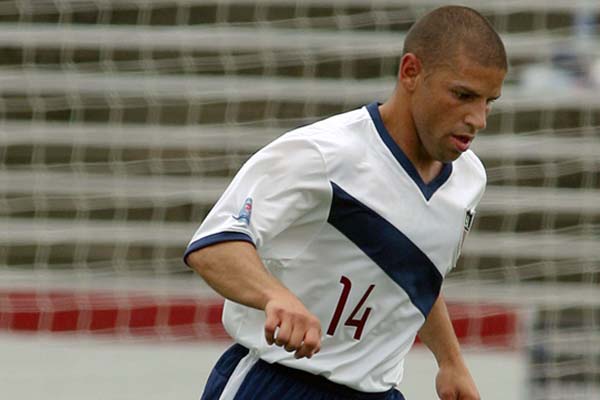 One of the primary players to benefit from new surroundings when the expansion Chicago Fire entered Major League soccer in 1998, Chris Armas used MLS as a platform to become a regular with the US National Team. Armas’ ability to position himself in front of the defense and stop plays before they develop is well known, but he is also valuable acting in the traditional midfield role, stringing passes to the forwards and creating space.

Despite missing the 2002 World Cup with a torn ACL, Armas returned to the form that made him the top defensive midfielder for the US National Team by leading the Fire to two trophies in 2003. In both 2004 and 2005 Armas saw action eight times for the US National Team. Unfortunately for Armas, his World Cup dreams were damaged when he a tore his ACL in his left knee during the Fire’s first MLS Cup Playoff contest in late October of 2005. While he was able to get back to the playing field at the start of the 2006 MLS season, his climb back to making Bruce Arena’s roster for Germany ran out of time.

Armas retired as a player at the end of the 2007 Major League Soccer season after Chicago’s defeat to New England in the Eastern Conference playoff final. Was a physical education instructor at St Anthony’s High School in Long Island and coaching youth soccer.  In July of 2011 he was named women’s coach at Adelphi University. Armas became an assistant with the New York Red Bulls, serving as head coaching from July, 2018 until September, 2020. He became the coach at Toronto in 2021, leaving in July. Armas was an assistant coach at Manchester United in 2021-22, joining the club in December through the end of the season. He became an assistant coach at Leeds United in January, 2023.

2005: Appeared in eight matches for the U.S. national team, including two World Cup qualifiers … Registered one assist.
2004: Started and played eight games.
2003: Returned to National Team to play four games and earn his 50th National Team cap.
2002: Started all 11 games he played for the U.S. before suffering season-ending ACL tear vs. Uruguay on May 12
2002: Assisted on Landon Donovan’s goal in 4-0 rout of Honduras
2001: Was one of the core players during World Cup qualifying, taking over as captain when Claudio Reyna was injured against Mexico on February 28 in Columbus, Ohio.
2000: Scored his first international goal against Iran on January 16 and led the national team in appearances with 14.  An injury picked up against Barbados on August 16 cost him his spot as an over-age player with the U.S. Olympic team.
2000: Named U.S. Soccer’s Chevrolet Male Athlete of the Year.
1999: Established himself at defensive midfield for the national team, featuring in almost every international when healthy.
1998: Debuted for Bruce Arena’s squad against Australia on November 6, 1998.

2007: Retired at the end of a season where he lead the Fire to the Eastern playoff final. Played 28 games (27 starts), registering two assists.
2006: After recovering from a torn left ACL in October 2005, returned to record 27 appearances, scoring one goal and adding five assists.
2005: Scored two goals and registered two assists in 22 appearances for Chicago … Made his 200th appearance in Major League Soccer on May 28, becoming only the 15th player to do so.
2004: Signed four-year contract with Fire. Played in 21 contests for the Fire, all starts, while notching one goal and seven assists. His seven assists marked the second highest single-season total for him in the category (10 in 1998) and the second most on the team in 2004, behind only Andy Williams (9).
2003: Returned to full fitness and led the Fire to the Supporters Shield and U.S. Open Cup scoring two goals and four assists.
2002: Assisted on one goal in four games before suffering season-ending ACL tear.
2001: Served double duty with the Fire and a demanding World Cup qualifying schedule but still featured in 21 of the Fire’s regular season games.
2000: A midseason injury limited his games with the Fire, but he was selected to the MLS Best Eleven and the All-Star team.  Started in the MLS Cup loss to Kansas City but lifted the U.S. Open Cup for the second time after the Fire defeated the Fusion in the tournament final.
1999: Featured in 22 games for the Fire while spending increasing time with the National Team.  Honored for the second time among the MLS Best Eleven.
1998: Traded with Jorge Campos to the expansion Chicago Fire from the Los Angeles Galaxy on January 27, 1998.  Armas established himself as one of the best midfielders in MLS, missing only one start during the regular season and again stepping up for the playoffs.  Named to the MLS Best Eleven for the first time on his way to winning the MLS Cup and the U.S. Open Cup with the Fire.
1997: Worked to establish himself as a two-way player, netting three goals for the Galaxy.
1996: Was a supplemental draft pick by the Los Angeles Galaxy, scoring a goal in a losing effort in the first MLS Cup.
1995: Began his pro career with the Long Island Rough Riders, earning All-Star honors and a USISL championship.

Youth and college: Adelphi University (1990-93). Selected NCAA All-American his senior year. Finished his collegiate career with 17 goals and 15 assists for 49 points in 73 games played. Inducted into the United Soccer League Hall of Fame in 2002