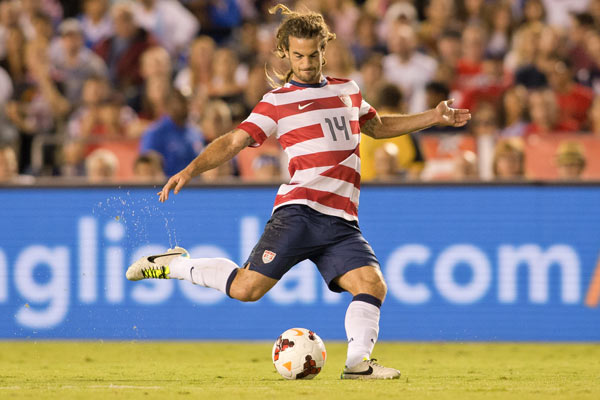 A solid two-way player, Kyle Beckerman has emerged as the complete midfielder at MLS and USMNT levels thanks to his increasing offensive talents.  Bypassing college for MLS, he’s an established veteran with the poise and positioning that only experience brings.  After being instrumental in helping the Colorado Rapids to two successive Western Conference finals, 2007 saw Beckerman win his first US cap, and then moved across the Rocky Mountains to Salt Lake City.

Quickly establishing himself as integral at RSL, Beckerman was part of the MLS Cup winning squad in 2009. RSL finished as MLS Cup runners-up in 2013. Beckerman retired on December 21, 2020 after 21 seasons in MLS.

2020: Played his final pro soccer season with Real Salt Lake, finishing 11 in the West.
2019: 25 games played with an RSL team that finished 3rd and once gain exited in the conference semifinals.
2018: Played in 31 games finishing 6th and making it to the Western Conference semifinals.
2017: 26 games, missing the playoffs.
2016: Played in 27 games finishing 6th in the West and exiting in the knockout round.
2015: 26 games, missing the playoffs.
2014: Played in 28 games with RSL finishing 3rd and exiting the playoffs in the conference semifinals.
2013: Another 2nd-place finish in the Western Conference with RSL, MLS Cup runners-up.
2012: Finished 2nd in the West with Real Salt Lake.
2011: Reached CONCACAF Champions League final with RSL.
2010: Played in 21 games for RSL, scoring two goals on only four shots taken.
2009: Won the MLS Cup as a member of Real Salt Lake.
2008: Named captain of RSL, leading the club to the Western Conference Final.
2007: Traded to Real Salt Lake from the Rapids in exchange for Mehdi Ballouchy. Had scored one goal and made two assists in 13 starts for Rapids before making move.  Helped partially revive a moribund Salt Lake, making 15 appearances (14 starts), scoring twice and registering an assist.
2006: Another trip to the Western Conference finals, this time losing to eventual champions Houston.  Club Golden Boot winner, scoring seven, equal first with Nicholas Hernandez.
2005: Lost in the Western Conference finals to Los Angeles.  Named Colorado’s Most Improved Player. One goal, four assists.
2004: Reached playoffs again with Colorado. Played total of 31 games, scoring once and assisting twice.
2003: First playoff experience with Colorado in the year he established himself as a starter. Played 30 games in all, registering six assists.
2002: After the contraction of the Fusion, picked up by Colorado where he made just five starts.
2001: Played just once for Miami.
2000: Joined MLS Project-40 and was signed by the Miami Fusion June 29. Played two games, making one start, but notched first career goal as a pro.