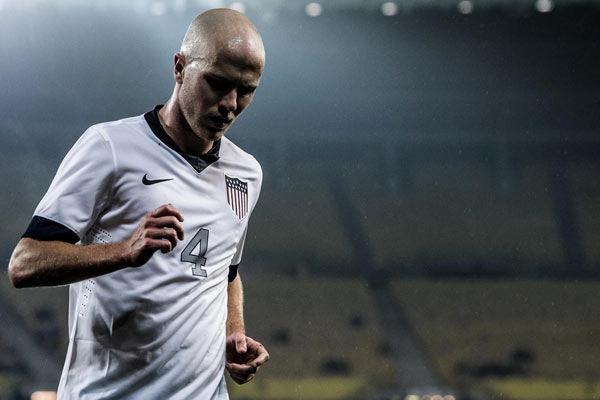 A product of the US Soccer academy at Bradenton, Michael Bradley bypassed college to enter the MLS SuperDraft where he was selected 36th overall by the Metrostars.  In his sophomore season, Bradley became a regular with the Metrostars, and a transfer target when that season ended.

After the 2005 season, Michael left MLS for the Netherlands and Heerenveen, the youngest MLS player ever to be transferred to a foreign club. In 2006, USMNT coach Bruce Arena brought Bradley in as a practice player for the World Cup squad, training with them in Cary and participating in the friendly schedule, but not traveling to Germany with the team.

Bradley has been a regular during the 2007 USMNT friendly schedule, and was included on the Gold Cup roster. In October he scored his first goal for the National Team, a late game winner against Switzerland. His goal-scoring performances in midfield for Heerenveen in the 2007-08 season began to capture the attention of English Premier League teams in early 2008, reportedly Sunderland and Everton.

A major transfer target during the ’08 summer window, Bradley ended up moving to the Bundesliga with recently promoted Borussia Moenchengladbach. In January, 2011, he moved to Aston Villa in England’s Premier League on loan for the rest of the season.  In August, he signed with Chievo Verona in Italy’s Serie A. In January, 2014 Roma announced they had completed Bradley’s transfer to Toronto.

2021: Missed the playoffs with Toronto, finishing 13th in the East during a season where pandemic restrictions meant playing a significant portion of their home schedule in Florida.
2020: Finished 2nd in the East with Toronto, exiting the playoffs in the opening round.
2019: Finished 4th in the East, playing in 27 games. Toronto made it to MLS Cup, with Bradley injured in the final.
2018: A 9th-place finish with Toronto, playing in 32 games.
2017: Won the MLS Cup, Supporters’ Shield, and Canadian Championship with Toronto.
2016: Advanced to MLS Cup, losing to Seattle on penalties.
2015: Made the playoffs with Toronto, the first time in the club’s history.
2014: Played in 21 games missing the playoffs in his first season with Toronto.
2013-14: Injury cost Bradley time in the fall with Roma. In January, he moved to Major League Soccer signing a deal with Toronto FC.
2012-13: The move to Roma was successful with Bradley regularly featuring for the club and finishing 6th in Serie A.
2011-12: Regular with Chievo, finishing midtable in Serie A.  Transferred to AS Roma in the offseason.
2010-11: Regular with ‘Gladbach, but was loaned to Aston Villa in the EPL for the rest of the season during the January window.  Signed with Chievo Verona for the 2011-12 season.
2009-10: Regular starter with ‘Gladbach, who finished 12th in the Bundesliga.
2008-09: Moved to the Bundesliga with Borussia Moenchengladbach where he was already played under three different head coaches.  Part of the squad that barely avoided relegation.
2007-08: Now a key starter in midfield for Heerenveen as the club pushed for a top-five spot in the Eredivisie. Had scored 12 league goals (and 16 in all competitions) by February, making him the team’s leading scorer.  Finished the season with 17 goals, a new record for a US player in Europe.
2006-07: Makes 14 appearances for Heerenveen.
2006: Leaves MLS for Heerenveen in the Dutch Eredivisie.
2005: Makes 30 appearances for the Metros, scoring one goal.
2004: Joins the Metrostars.