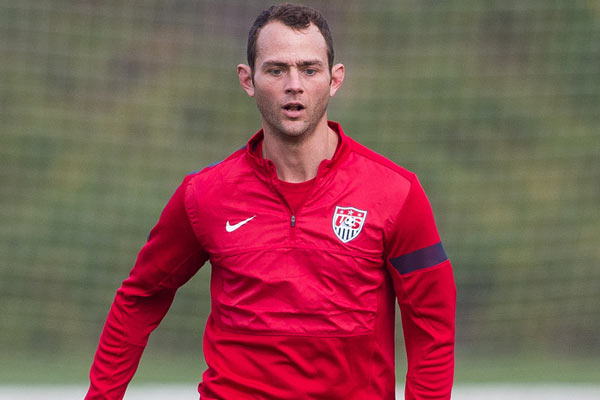 An MLS veteran with multiple team MVP awards and All-Star recognition, Brad Davis brings ample experience whether playing as a traditional midfielder or on the wing.  His biggest USMNT moment was converting the penalty kick that beat Panama for the 2005 Gold Cup.  As a member of the Houston Dynamo, Brad was part of one of the league’s great dynasties, winning the 2006 and 2007 MLS Cups. Davis reemerged on the USMNT scene during qualifying for the 2014 World Cup, playing a key role in the successful campaign. He joined Sporting Kansas City for 2016, announcing his retirement at the end of the season.

2016: Joined Sporting Kansas City in January.
2015: A switch to the Western Conference and an 8th-place finish with the Dynamo.
2014: Finished 8th in the Eastern Conference with Houston.
2013: Started 25 of 26 games for the Dynamo in a season where they made the semifinals.
2012: Played in 34 games for Houston starting all of them. Runners-up for the MLS Cup.
2011: Helped Houston reach MLS Cup final, missed game because of injury.
2010: Finished third in MLS with 12 assists, adding five goals in 27 games.
2009: Tied for the MLS assist lead with 12, playing in 26 games for Houston. Scored in the All-Star game against Everton.
2008: Scored three goals in 26 appearances.
2007: After a strong start to the season, he missed 13 games before returning to factor in the Dynamo’s second MLS Cup.  Had the assist on the winning goal.
2006: Moved with the club to Houston where he had 11 assists.  Won the MLS Cup.
2005: Traded to the Earthquakes where he made the All-Star team.
2004: A regular starter for the Burn, scoring two goals in 29 games.
2003: Traded to Dallas, where he scored six goals.
2002: Strong rookie season as a member of the MetroStars, playing in 24 games.

College:  Played two seasons for the University of St Louis.