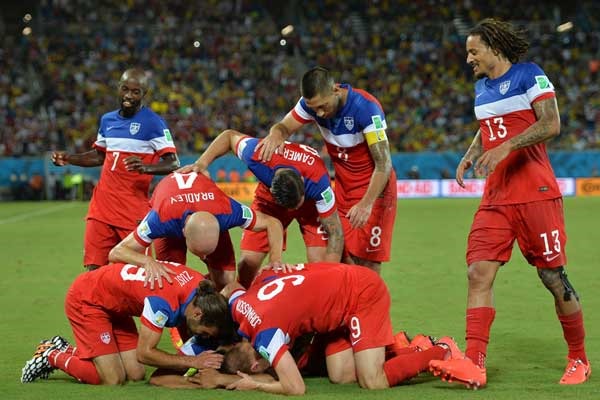 The USMNT opened Group G play at the 2014 World Cup with a 2-1 win over Ghana on Monday at the Estadio das Dunas in Natal. Clint Dempsey opened the scoring 34 seconds into the game, with the USMNT defending that lead until the 82nd minute. Andre Ayew equalized finally turning a Ghana opportunity into a goal. Ghana’s equalizer held for four minutes with John Brooks scoring the USMNT’s winner.

The USMNT ran into injury problems in the heat of Natal. Jozy Altidore left the game on a stretcher in the 21st minute with a strained hamstring. Altidore will undergo scans to determine the severity of the injury. Matt Besler followed at halftime with USMNT coach Jurgen Klinsmann not wanting to risk another hamstring injury. In his place, Klinsmann brought in Brooks. Klinsmann used his last substitution to bring on Graham Zusi in the 77th minute in place of Alejandro Bedoya who also showed signs of muscle strain. Zusi assisted on Brooks’s game winning goal.

Ghana had lineup issues of their own, with Kevin Prince Boateng and Michael Essien not in the starting eleven. With lots of time on the ball, Ghana had trouble turning chances into shots on goal. Boateng subbed on in the 59th minute and Essien followed in the 71st.

In the other Group G game, Germany had no issues with Portugal in a 4-0 shutout in Salvador. Thomas Muller scored a hat-trick with Portugal losing Pepe to a red card in the 37th minute. Germany plays Ghana on Saturday with the USMNT vs Portugal on Sunday.

“The first half was the problem for us,” Portugal coach Paulo Bento said. “With the exception of the first few minutes, when we made a slow start, we were pretty much in control of things, and it was a fairly even game until the first goal. In the second half we just tried to cope with being a man down the best we could. It’s very strange to have someone sent off in a game like this. That’s pretty much what the match hinged on.”