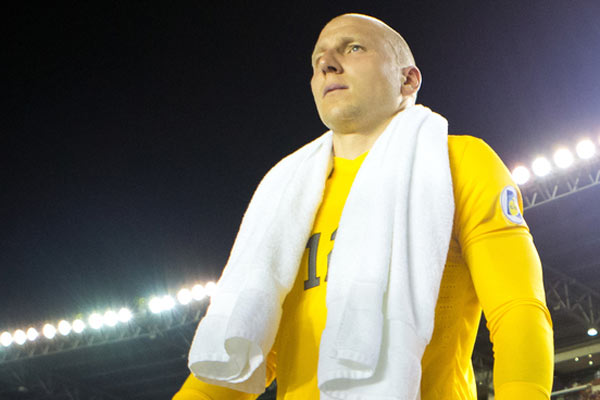 Considered a surprise pick by Chivas USA, and second overall at the 2005 MLS Super Draft, Brad Guzan quickly showed he might be the next great American goalkeeper.  As his team gave him plenty to do in its first season, the towering, vocal keeper’s game continued to improve, and in 2007 both he and his team-mates enjoyed a breakout season in MLS. He won his first USMNT cap in 2006, followed by a second the following year at the Copa America.

In 2007 he was voted Major League Soccer Goalkeeper of the Year.  By 2008, Guzan was a transfer target for several European clubs. Midway through the ’08 MLS season, he joined Aston Villa. Guzan started his career with Villa as the backup for former US National Team stalwart Brad Friedel. Guzan eventually took the starting job. He left the club for Middlesbrough prior to the 2016-17 season. Guzan joined Atlanta United after the 2017 Gold Cup.

2022: Missed most of Atlanta’s season due to injury, with United finishing 11th in the East.
2021: Finished 5th in the East, exiting the playoffs in the opening round.
2020: Regular starter for Atlanta, missing the playoffs over a rearranged schedule due to the pandemic.
2019: Finished in 2nd-place with Atlanta, advancing to the conference finals. Won the US Open Cup.
2018: Made the playoffs with Atlanta, winning MLS Cup.
2016-17: Spent the season with Middlesbrough, winning starts on a team with several good goalkeepers. Announced move to Atlanta United following the season, with Boro eventually relegated. Advanced to the playoffs with Atlanta.
2015-16: A tough season at Aston Villa ended with the club’s relegation. Guzan joined Middlesbrough on Aug 29, 2016.
2014-15: Finished 17th with Aston Villa in the Premier League.
2013-14: A regular in goal for Aston Villa, finishing 15th in the Premier League.
2012-13: Took the starting job under new manager Paul Lambert for a Villa team that finished 15th in the Premier League. 2011-12: Backup at Aston Villa.
2010-11: Under new manager Gerard Houllier used as a backup at Aston Villa. Loaned to Hull City in January, 2011.
2009-10: Backing up Brad Friedel in the Premier League and starting regularly in the Europa League and domestic cup competitions.  Had a strong showing against Sunderland in the League Cup on Oct 27th, stopping a penalty in regulation and then stopping three more as Villa advanced on penalties.
2008-09: Left MLS for Aston Villa midway through the season.  The regular starter for Villa’s UEFA Cup campaign.
2007: Posted a 0.93 goals against average in 27 games, including an impressive 13 shutouts, as Chivas USA won the Western Conference.  MLS Goalkeeper of the Year.
2006: In goal for 15 games overall as Chivas made the playoffs, but injury kept him out the side for around half the season.
2005: Left college early to sign with Major League Soccer, drafted by Chivas USA.  Becomes the surprise starter making 23 starts in his and team’s disappointing rookie season, posting a GAA of 1.99.
2004: Member of Chicago Fire reserves where he was named PDL All-League.