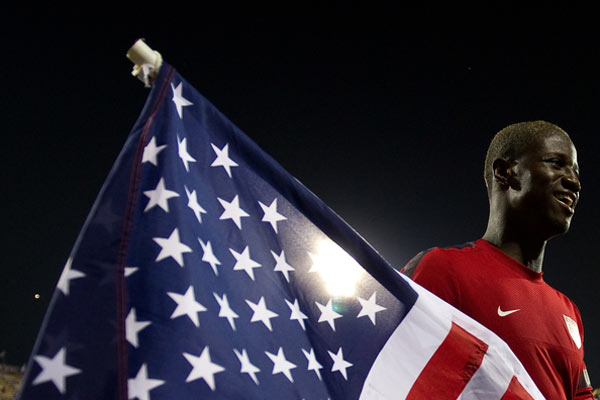 After making a name for himself with the Dallas Burn/FC Dallas and establishing himself as a dangerous striker, Eddie Johnson burst onto the US National Team scene with five goals in his first three games during the fall of 2004.

Johnson became one of the top strikers in the US, and backed that up by making two appearances in the 2006 World Cup. On the club side, he moved to Fulham in 2008, playing on loan for Cardiff City, Aris, and as of January 2011, Preston North End.

Johnson returned to Major League Soccer for the 2012 season with Seattle. He moved to DC United in December, 2013. On November 1, 2015 Johnson announced his retirement from professional soccer.

2014: Subbed on in the second-half against Korea on Feb 1 and Mexico on Apr 2.
2013: Started against Honduras on Feb 6th. Subbed on for the Mar 22nd qualifier against Costa Rica and on Mar 26th against Mexico. Subbed on against Germany on Jun 2nd. Subbed on against Jamaica on Jun 7th and started against Panama on Jun 11 and scored the second goal. Started against Honduras on Jun 18. Subbed on against El Salvador in the Gold Cup quarterfinals on Jul 21 and scored almost immediately. Started the Jul 24 semifinal against Honduras and scored. Started the final against Panama on Jul 28. Started the friendly against Bosnia and Herzegovina on Aug 14th and scored. Subbed on in the second-half against Costa Rica on Sep 6 and started against Mexico on Sep 10 and scored. Started against Scotland on Nov 15 and subbed on against Austria on Nov 19.
2012: Returned to the squad for the October World Cup Qualifiers and started and scored both goals in the win against Antigua & Barbuda on Oct 12th.
2010: Came on in the second-half against Holland on March 3rd. Played in the Sendoff Series against the Czech Republic.
2009: Returned to the National Team as a second-half substitute against Slovakia on Nov 14th. Came on again in the second-half against Denmark on Nov 18th.
2007: Part of the Gold Cup championship squad and named to the Copa America roster. Scored two goals in 11 senior team appearances (eight starts).
2006: Appeared in 11 of 13 games for the United States including two World Cup appearances.
2005: Had three goals in six appearances, two in qualifiers.
2004: Made his first of three appearances with the US Men’s National Team, scoring goals in each of the World Cup Qualifying games. Had a breakout performance against Panama on Oct. 13th at RFK stadium, scoring three goals as a substitute.

2015: Did not play, announcing his retirement as a member of DC United on Nov 1. 2014: Part of a revival act in DC where the team finished top of the Eastern Conference before losing to the New York Red Bulls in the Conference semifinals.
2013: Started 20 games and scored nine goals for Seattle. Traded to DC in December.
2012: Signed with Major League Soccer, where he was allocated to Montreal before being traded to Seattle that same day. Played in 28 games starting 24 and scored 14 goals for the Sounders.
2010-11: Spent the first half of the season with Fulham before going on loan with Championship club Preston North End in January, 2011.  Johnson was rumored to be joining Major League Soccer in August, but the deal wasn’t completed.
2009-10: Returned to Fulham for the first half of the 2009-10 season. Loaned to Aris in the Greek Super League where he was a regular in a team that qualified for the Europa League. Returned to Fulham at the end of the season.
2008: Joined Fulham in the English Premier League and was loaned to Cardiff City in the Championship.
2007: Scored 15 goals and registered six assists in 27 starts overall, winning the MLS Comeback Player of the Year award. Played for the MLS All-Star XI in 2-0 win over Glasgow Celtic.
2006: Scored two goals and added one assist in 19 games for the Kansas City Wizards after being traded from FC Dallas in the off-season.
2005: Scored five goals and registered two assists in 15 matches for FC Dallas.
2004: Scored 12 goals and registered three assists in 26 games (25 starts) for Dallas.
2003: Played 22 games (13 starts), scoring three goals.
2002: Played in 11 games, starting two, notching two goals and an assist.
2001: Played ten games (one start, two goals) after spending most of the season with the US U-17 National Team in preparation for the FIFA World Youth Championships.