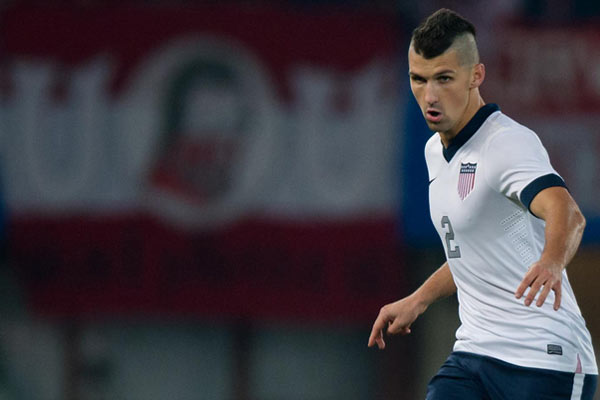 Eric Lichaj played one NCAA season with North Carolina before trying his luck as a pro. In 2007, English club Aston Villa scooped Lichaj up at the age of 20. Unlike other Americans, Lichaj did not have to struggle to get a work permit because of his Polish dual citizenship. After Lichaj signed with Aston Villa, he started with the club’s academy team but moved up to the reserve squad in 2008. A year later, he was promoted to the first team, but never got playing time. He was loaned to League Two club Lincoln City and a second time to League One club Leyton Orient, where he became a starter at right back.

Lichaj returned to Aston Villa and broke into the starting lineup during the 2010-11 season. He made his debut in a Europa League match against Austria’s Rapid Vienna and continued to get minutes in Premier League matches. After Gerard Houllier took over as manager, Lichaj lost his spot in the starting lineup and in February 2011 was loaned to Leeds United. Villa released Lichaj in the summer of 2013. He joined Nottingham Forest in June. After five successful seasons with Forest, Lichaj signed with Hull City for the 2018-19 Championship season. He left the club following the 2019-20 season, signing with Turkish Super Lig club Fatih Karagumruk. Lichaj joined Nottingham Forest as their U-23 coach for the 2021-22 season, moving to FC Cincinnati as U-19 coach in March, 2022.

2020-21: Joined Turkey’s Fatih Karagumruk, finishing 8th in the Super Lig.
2019-20: Played in 29 games with Hull City before the suspension of the season in March. Opted against signing a new contract offer, leaving the club before the season resumed.
2018-19: Moved to Hull City for the 2018-19 Championship season, finishing 13th.
2017-18: Finished 17th in the Championship with Forest, his final season with the club. Made 173 total appearances for Forest.
2016-17: Finished 21st in the Championship with Forest.
2015-16: A 16th-place finish with Nottingham Forest.
2014-15: Finished 14th with Forest.
2013-14: Played in 24 games for Nottingham Forest, finishing 11th in the Championship.
2012-13: An occasional starter for Aston Villa, he was released at the end of the season. On Jun 19, he signed with Championship club Nottingham Forest.
2011: Scored his first goal for Aston Villa in a 2–0 win over Hereford United in August in the Carling Cup. Loaned to Leeds United in February.
2010: Loaned to League One side Leyton Orient, where he scored once in nine games.
2009: Loaned to League Two club Lincoln City, where he made six appearances.
2008: Signed with Aston Villa.