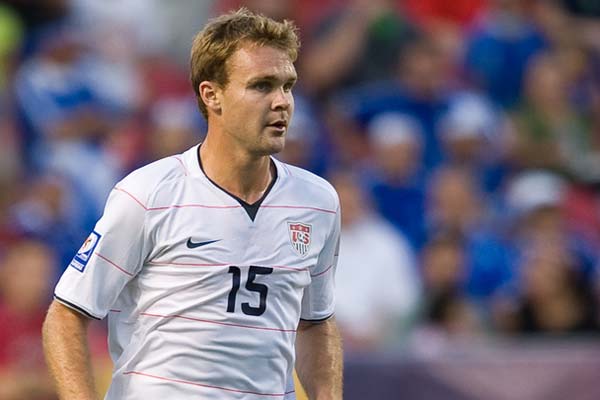 Chad Marshall made an immediate impact on the Columbus Crew from the time he arrived in his rookie season in 2002.  Chad left Stanford after his sophomore year to sign with MLS as a Nike Project-40 player and was The Crew’s top pick (number two overall) in the 2004 MLS SuperDraft. Since then he has developed into one of the top centerbacks in Major League Soccer, and is one of the major aerial threats on set pieces around MLS.  His play was a big part of the 2008 Crew title run. Individually, he was named MLS Best XI and Defender of the Year in 2008.

Marshall made his debut for the senior USMNT squad in 2005, scoring in a friendly against Colombia. He won three more caps that year. Marshall made the preliminary roster for the 2010 World Cup, but didn’t travel to South Africa.

In the 2013 off season, Columbus traded Marshall to the Seattle Sounders. He won the 2016 MLS Cup with Seattle. Marshall announced his retirement on May 22, 2019.

2017: Started against Serbia on Jan 27.
2010: Played in the January friendly against Honduras.
2009: Returned to the US National Team for the Gold Cup, where he was a regular starter.
2005: Earned first cap on March 9, a win against Colombia 3-0 in a friendly in Fullerton, CA. Scored a goal in his debut. Played three more games (two starts) over the year.
2004: Made U-23 debut, appearing in four of the five US games (three starts) in the final round of CONCACAF Olympic qualifying in Mexico.
2003: Started all five U-20 games at the 2003 FIFA World Youth Championship in December 2003 as the team reached the quarterfinals. Played in all the team’s 19 international matches this year.
2001: Made 12 appearances at U-17 level in 2000-01. Started two games at the 2001 FIFA World Youth Championship in Trinidad & Tobago.

2019: Announced his retirement on May 22.
2018: 28 games with Seattle, making the playoffs.
2017: Played in 28 regular season games with Seattle, advancing to the MLS Cup final.
2016: Finished 4th in the West with Seattle, but a playoff run meant an MLS Cup final. Seattle beat Toronto on penalties.
2015: Exited the playoffs in the quarterfinal round after finishing 4th in the West.
2014: Won the Supporters’ Shield and US Open Cup with Seattle.
2013: Played in 30 games in his final season in Columbus, scoring a goal. Traded to Seattle in December 2013.
2012: Played in 24 games for the Crew.
2011: Named captain of the Columbus Crew for the 2011 season. Started all 32 games.
2010: Played in 26 games for the Crew. Had one regular season goal.
2009: Led the Columbus Crew to the MLS Supporters Shield.
2008: Had the game-winning goal in the 2008 MLS Cup and named MLS Best XI and Defender of the Year.
2007: Injury-effected season limited him to 12 games (11 starts). Still managed two goals from the backline.
2006: Scored one goal and had an assist in 26 games for the Crew.
2005: Scored one goal and registered three assists in 30 games for the Crew.
2004: Appeared in 28 matches, 27 of them starts, as one of the league’s top rookies. Was a finalist for MLS Rookie of the Year honors as Crew won the Supporters’ Shield.

College and High School: A Stanford standout for two seasons, making 40 appearances (39 starts), including the 2002 NCAA Men’s College Cup final. An NCSAA All-American as a senior at Rubidoux High School. Named the top college recruit in the country by Soccer America.