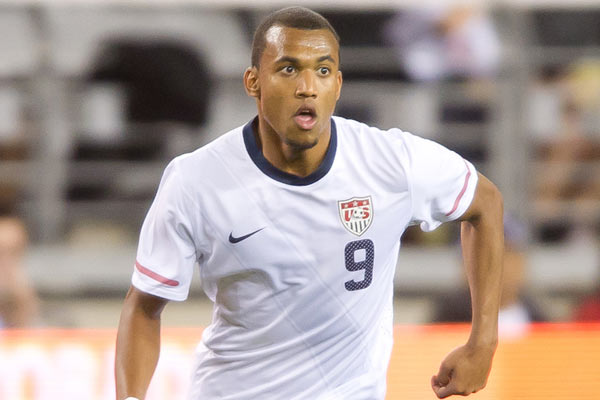 Teal Bunbury is a second-generation MLS player and a Hermann Trophy winner as the top player in college soccer. He made is first USMNT appearance in 2010, choosing the USMNT over Canada. Bunbury left the University of Akron after his sophomore season. He was selected 4th overall by Kansas City in the 2010 MLS SuperDraft. He accepted a call up with the USMNT that Fall, making his debut against South Africa in the Nelson Mandela Challenge Cup. The next month he had a trial with Stoke City, in 2012. He won the U.S. Open Cup with Sporting Kansas City in 2012. In Feb 2014, Bunbury joined the New England Revolution. He moved to Nashville for the 2022 season.

2022: Finished 5th in the West with Nashville, exiting in the opening round of the playoffs.
2021: Won the Supporters’ Shield in a record setting season with the Revs. Exited the playoffs in the semifinals. Traded to Nashville in December.
2020: Made the playoffs with New England, exiting in the first round.
2019: 10 games for the Revs, finishing 7th and exiting the playoffs in the knockout round.
2018: Played in 32 games and scored 11 goals for an 8th-place Revs team.
2017: Missed the playoffs with New England, playing in 27 games and scoring 8 goals.
2016: Part of a Revs team that made the US Open Cup final. Missed the playoffs, finishing 7th in the Eastern Conference.
2015: 5th in the East with the Revs, advancing to the playoffs.
2014: Traded to the New England Revolution in February. Finished 2nd in the East and made the MLS Cup final.
2013: Recovering from injury, played in 10 games late in the season.
2012: Had 20 appearances scoring five goals in MLS play with Sporting Kansas City. Won the U.S. Open Cup. Missed the end of the MLS season with a torn ACL.
2011: Played in 29 games scoring 9 goals with Kansas City.
2010: Drafted 4th overall by Kansas City, playing in 26 games and scoring 5 goals in his rookie season.

High School and College: All-American at the University of Akron in 2009. Won the Hermann Trophy in 2010. Part of the Akron teams that finished runners-up at the College Cup in 2009 and won the national championship in 2010.