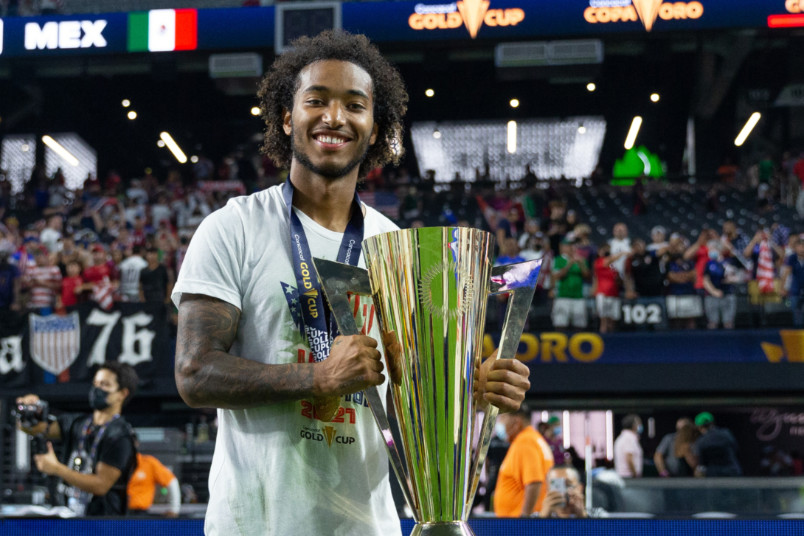 By Clemente Lisi – NEW YORK, NY (Aug 9, 2021) US Soccer Players – Major League Soccer has been the place for young talent to flourish the past few years. It isn’t so rare when a teenager makes his debut, shines for a few years, and then moves to Europe. It’s a testament to the growth of US soccer and the power and importance of MLS. A prime example of this has been the success of Gianluca Busio, the 19-year-old midfielder who just completed a transfer from Sporting Kansas City to Venezia in Serie A.

Born in North Carolina but holding an Italian passport through his father, Busio joined Sporting KC’s academy in 2016. A year later, he signed a Homegrown Player contract becoming one of the youngest players in league history.

Getting his first team opportunity in 2018, Busio would eventually make 61 MLS regular-season appearances for the club under coach Peter Vermes, recording seven goals and eight assists. This season, he had a passing accuracy of 89% and had been key in Sporting KC’s quest not just to make the playoffs but to challenge for the Supporters’ Shield. He’s leaving a contender, something that shows how much foreign clubs value MLS players and how MLS clubs now operate in the transfer market.

Busio could make his official debut later this month when Venezia opens the Serie A season on August 22 away at Napoli. He joins former FC Dallas midfielder Tanner Tessmann, who signed with the Venice-based club last month. USMNT midfielder Weston McKennie (Juventus) and right back Bryan Reynolds (AS Roma) are other Americans already playing in Italy. In the official announcement put out by Sporting KC, Busio said the team would “always have a special place in my heart” and that he’s “really excited to join Venezia.”

There’s no downplaying the opening of Serie A for Americans. Along with Spain, it’s always been a tough league for US players to find opportunities. All of a sudden that seems to be changing. Though a European passport is always likely to help, clubs are making decisions based on talent. MLS is not a league that is under-pricing players or showing naivety about the global transfer market. Busio is just the latest example of that.

At international level, Busio had a busy summer after making his US National Team debut at the recent Gold Cup. Part of a United States team that showed how quickly it could come together at a tournament, Busio’s game impressed. We caught up with Busio on the eve of his move to Italy, where we talked about that Gold Cup experience.

You’ve had quite a summer after winning the Gold Cup. At what point during the tournament did you think the US could win it all?

I think from the start, to be honest. I think when we got there, we all got there with the same goal. Obviously, some players were (playing) in different positions as others, but we all came there wanting to win. We didn’t think about anything else other than winning. There are things that play into it, but the end goal of the tournament was that we wanted to win it all. After the first game we kind of felt it a little bit, but after that (we) kept on moving forward and forward. Obviously, the late goals gave us some more hope and passion. I think the whole tournament we were just ready for it. In the end, we achieved the goal.

World Cup Qualifying is coming up, and it will mark a very busy period for the National Team. What do you think you can bring to this US team?

I think, obviously, we have technical players. Everyone on the National Team has to be very good technically. I bring that to the table, and I fit right in with that and obviously the calmness on the ball. That’s something good, especially in these intense type of games. That’s something I want to bring to the team.

You made your senior US National Team debut against Martinique at the Gold Cup last month in Kansas City. What was that like?