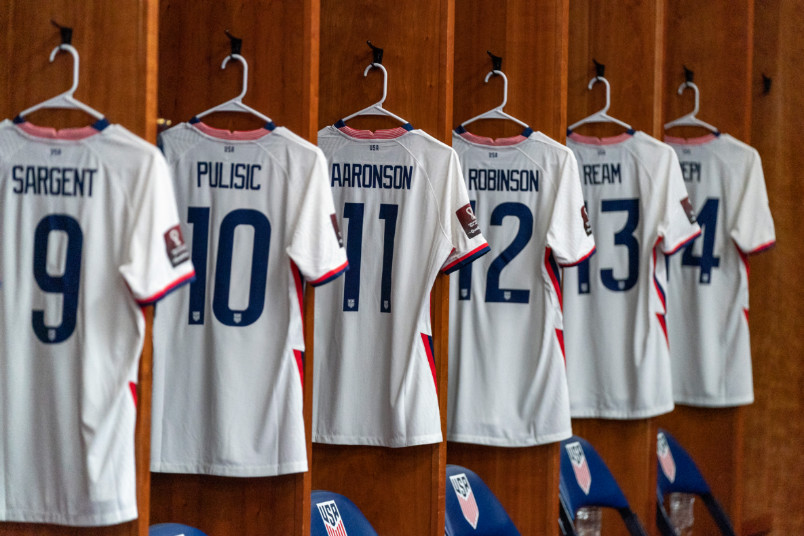 By Clemente Lisi – NEW YORK, NY (Oct 18, 2021) US Soccer Players – World Cup Qualifying rolls on as the road to Qatar 2022 starts to take shape. Aside from the host nation, Germany and Denmark were the first two teams to qualify for the World Cup finals. The pandemic forced a condensed schedule of qualifying games, adding to the emotion and drama that usually comes with these games.

Concacaf did away with the Hexagonal and replaced it with the Octagonal, adding two more teams to the final round of qualifying that has proven both competitive and intense for all of the eight involved. The top three qualify for the World Cup, while the 4th-place finisher advances to the inter-confederation playoffs.

It’s true that Concacaf doesn’t get the respect it deserves, but just try asking the players just how intense these matches can be. The altitude of the Estadio Azteca when facing Mexico, the loud crowds when traveling to Central America, and having to play the United States in carefully considered venues are all significant challenges.

The next qualifying window starts up again on November 12 with the much-anticipated USMNT encounter against Mexico at TQL Stadium in Cincinnati with 1st-place on the line. “When you talk about great rivalries in our sport, USA-Mexico is one of the best,” USMNT coach Gregg Berhalter said. “We are fortunate to have so many great venue options in this country, and for this match Cincinnati ticks all the boxes.”

As Concacaf World Cup Qualifying reaches its midway point, here are three things we have learned

Let’s start with the United States and the continued emphasis on youth as the team grappled with the recent injuries of Christian Pulisic and Claudio Reyna. Berhalter has encouraged the team to play a more attack-minded possession game. The stats show that’s exactly what has happened. The team has outscored opponents 9-4 over six games. More importantly, the Americans have averaged 58% possession of the ball, second only to Mexico.

Much of the Berhalter’s tactical vision has been the product of young players. Standouts like striker Ricardo Pepi is just 18 years old, midfielder Gianluca Busio only 19, and Sergino Dest is 20. The challenge has been rotating lineups as injuries and COVID-19 travel limitations remain an issue. Overall, it’s a new generation that’s carrying this team, and it’s been fun to watch.

Mexico remains in the driver’s seat

Mexico may be the traditional powerhouse in the region, but their record in games that count against the USA took a hit over the summer. Two, in fact, losing the finals of the Nations League and Gold Cup. That triggered some introspection on the part of manager Gerardo “Tata” Martino and Mexican soccer, from the FA on down to TV pundits, as a whole. Mexico, however, has been able to move on and has been very strong in qualifying. With the exception of a 1-1 draw against a much-improved Canada, Mexico leads in the standings and seems to have found their groove again.

“We see the players well, committed, not only in training, but also in games,” Martino said during a recent news conference when discussing the mindset of his players. “We always look for there to be high competitiveness within the group.”

Mexico is unbeaten in the Octagonal. The team looks to have settled in Martino’s 4-3-3 formation as their depth has been evident over the past few weeks. Veteran midfielder Andres Guardado and striker Hirving Lozano, back from injury, have been key as goalkeeper Guillermo Ochoa continues to give the team reassurance in the back.

Canada is a much-improved side

Canada is the other undefeated team, emerging as a strong contender to qualify for only the second time in program history. 1986 was a different world, with the more recent versions of Canada struggling to make the final round since a last-place finish in 1998. They’re showing what a new group of players can quickly accomplish in the region.

Under coach John Herdman, Canada has utilized a 3-5-2 with a midfield that has been both gritty and tenacious, qualities that can help win games during tough road games. It’s this type of pressing game that has helped Canada get points on the road.

“We haven’t been to a World Cup since 1986,” Herdman told reporters last week. “These teams have. So, when you’re trying to take that away from us, we’re getting in there — everyone.”

On the wing, Vancouver Whitecaps alum Alphonso Davies has truly been exceptional and proof that having some of your best players in Europe can help improve a national team program. Davies, a staple at Bayern Munich, gives Canada speed and pace at a key position. He’s playing with confidence, and that could very well be what gets the Canucks to Qatar.

There’s still plenty of soccer left to play. As the Octagonal takes shape, the region’s four Central American reps Panama, Honduras, Costa Rica, and El Salvador, remain difficult, especially on the road. Jamaica, the only Caribbean nation left in qualifying, is in desperate need of points in November.