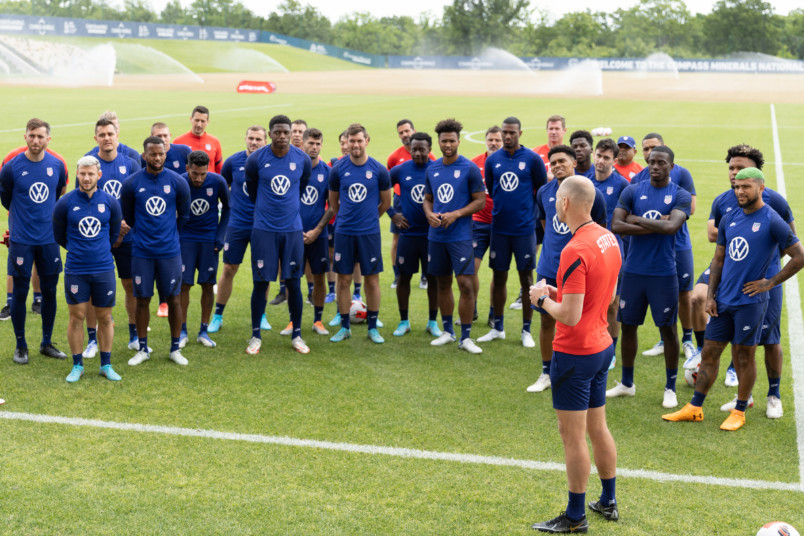 By Charles Boehm – AUSTIN, TX (Jun 9, 2022) US Soccer Players – The night of October 15, 2019, was difficult for Gregg Berhalter and the USMNT. Four days after routing Cuba 7-0 at DC’s Audi Field to open their first Concacaf Nations League schedule, the Yanks traveled north to Toronto to meet Canada at chilly BMO Field, their 16th game under the coach’s leadership.

Almost everything went well for Canada, and almost nothing went well for the visitors. The USMNT fell 2-0 via second-half goals from Alphonso Davies and Lucas Cavallini. It was a low point in Berhalter’s first year in charge and, in retrospect, his overall tenure. The entire group had to reflect and regroup before storming back into the top spot in Nations League A group A with two emphatic wins the following month.

It’s noteworthy that Berhalter specifically alluded to that Canada loss as he fielded questions from reporters about Friday’s meeting with Grenada at Q2 Stadium in a Texas heat wave, the United States’ opening fixture of the Concacaf Nations League’s second edition.

“The big game in Canada that we lost, it was a real wake-up call for us as a group as to how difficult these games are and not to take anything for granted, and specifically, the amount of intensity that we need to bring to each and every game,” he said on Thursday afternoon. “That in itself was a great learning tool. We went on to win our group and then win the tournament… Overall, the Nations League has been good to us, and we’re excited to start our title defense tomorrow.”

He and his players have repeatedly shared perspectives like that this week as reporters ask how they can possibly maintain their focus and commitment as they shift from a global power like Uruguay to Grenada, ranked 170th by FIFA.

Friday night in Austin is the USMNT’s final game on US soil before the World Cup. It and Tuesday’s Nations League visit to El Salvador are fully competitive matches. They affect the USMNT’s own FIFA ranking, the buildup to the 2022 World Cup, individuals’ hopes of earning a place on the plane to Qatar, and the program’s hold on the title of Nations League champions. They’re games that count for the USMNT, full stop.

“All focus is on the game and the Nations League,” winger Jordan Morris said on Wednesday. “Nothing changes based on the opponent. We go out and execute our game plan and work on the things that we want to work on in the game. Everyone’s going to go out and compete and show themselves to the best of their ability. But again, it comes back to the collective and getting better as a team, because there’s not that many games left before the World Cup.”

It’s safe to say that the Nations League was not conceived and implemented with the region’s elite national teams in mind. The main purpose was to create more competitive matches to elevate smaller nations. Eventually, that could shrink the gaps that exist between Concacaf’s de facto upper, middle, and lower echelons.

That brings with it the potential for mismatches but also the opportunity for tough games. The USMNT experienced that last time around. Canada’s Nations League performance foreshadowed Les Rouges’ impressive first-place finish in the Octagonal phase of 2022 qualifying. Even if USA vs Mexico was the expected matchup for the first-ever Nations League final, the path required to get there and the exhilarating 3-2 extra-time victory in Denver turned out to be very useful building blocks for the road to Qatar.

Now, something similar can be said about this month’s Nations League affairs and the final decisions about roster slots and tactical plans for the big event in November.

“We know that this game is going to be about our mindset, our intensity, what we’re bringing to this game, and that’s a really important thing,” Berhalter said. “So if you talk about evaluation, this is a really easy game. Because we’re evaluating our mentality, we’re evaluating our intensity, the ability to play in warm conditions, overcome that mentally, and it’s about us and I think that’s the important thing.”

The subsequent trip to Central America will hark back to the difficult qualifying journeys this group has navigated. Any and all such excursions help broaden the experiences of a young squad that still has played relatively few of its games together on foreign soil and had to learn some things the hard way, just like that night in Toronto.

“Anytime that you’re playing for a trophy, it’s a great experience. It obviously doesn’t mimic a World Cup but it’s a similar sense that you’re trying to accomplish a goal and win a trophy,” said Morris. “I think that the mentality throughout the last one was great and it brought the group closer together, instilled confidence and pushed us forward, and I think that we’re going to use this as a similar platform these couple of games.”

2022’s unique schedule complicates the countdown to the big tournament. Just four games remain until that much-anticipated group stage opener vs Wales at Al Rayyan Stadium on November 21. Berhalter and his staff still don’t even know exactly how many roster spots they’ll have to work with by that point. Relatively few of his players can be certain that their place is assured.

Time is short, and every second on the pitch is precious for both individuals and the group. That figures to make this Nations League experience intense by any measure.

“If you look at these four games as a whole,” said Berhalter, “the idea was to improve our team and to evaluate some players, and to start the defense of the Nations League title. So we still have time to fit all those things into this trip. And we will use the next two games to evaluate players in different ways. So that’s going to be our focus of these next two games.”