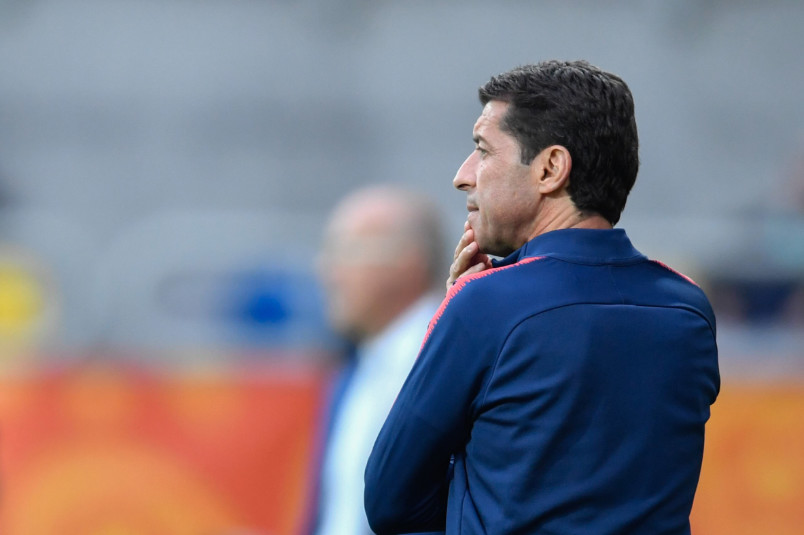 By Jason Davis – WASHINGTON, DC (Aug 24, 2022) US Soccer Players – The impetus to push forward and expand clubs beyond a first team into areas like player development is changing the way lower division clubs in the United States operate. Major League Soccer doesn’t have a monopoly on ambition and it’s not the only league trying to make complete clubs who can stand the test of time.

In another statement of intent from a USL Championship club, Hartford Athletic added National Soccer Hall of Famer Tab Ramos as head coach this week. Ramos’s playing career helped set the foundations on which the modern USMNT is built and his time playing in Spain in the early 90s set the stage for those who later followed him to Europe.

As a coach, Ramos led the USMNT U-20 team for eight years, shepherding along much of the talented group that is now the core of the national team heading into the 2022 World Cup. He coached the Houston Dynamo for two COVID-marred seasons between 2020 and 2021 and parted ways with the MLS team following a leadership change last year. In Hartford, Ramos will work primarily with the first team while also lending his expertise to the academy the club is pushing to grow in the coming years.

“Tab Ramos is a giant in American soccer and among the most highly regarded coaches in the country. We are thrilled to have him as our head coach,” said Hartford Athletic Chairman Bruce Mandell said the club’s statement. “Our goal is to bring championships to Hartford, and there is no coach better suited to get us there than Tab Ramos. He raises the bar for our technical staff and soccer operations and will provide critical direction to our expanding youth academy program.”

Mandell’s ambition was a significant factor in Ramos’s decision to take on the USL challenge.

“(It was) mostly the relationship I have been able to develop with (technical director) Ray Reid, Bruce Mandell, and the ownership group over the last two months, and their plans for the future on closing the gap with the bigger clubs and the tremendous fan support that the team has,” Ramos told US Soccer Players when asked about his decision.

Ramos will take over for Reid on the sideline at the start of September. Reid was never supposed to lead the team on the field, having arrived at Athletic with the express intent to oversee the soccer operation as technical director. The former University of Connecticut head coach is a legend in the state and should be perfectly positioned to help Ramos get the most out of Hartford teams.

The rest of the 2021 season will be a testing ground for Ramos as he leads a team well off the playoff places at his arrival. Jumping onto the sidelines with seven games to go means Ramos can get a lay of the USL Championship without feeling the pressure to deliver immediate results.

“I was somewhat familiar with the league because in Houston we looked at the USL for potential reinforcements since we did not have the budget to buy international players,” Ramos said when asked about his knowledge of the USL Championship. “In addition to that, I watched many games over the years as I followed some U-20 National Team players that would get dropped from their MLS teams to play on the weekends.”

Ramos has deep connections to all levels of the game in the US and leveraged some of his relationships for info on the league.

“I have spoken with contacts in MLS who are familiar with the league, had conversations with Mark Cartwright, USL’s Technical Director, and brief conversations with John Hackworth in addition to contact with Danny Cruz, Mark Briggs, and others,” he said.

Ramos feels his Dynamo teams played better soccer than their record showed and takes confidence from his experience coaching in MLS.

“I learned so much about the league and the work rate of the everyday MLS players,” Ramos explained, “I truly enjoyed my experience and believe my staff and I did a good job with the team. Our expected goals for and against should have led us to 12 to 14 wins but unfortunately, we just couldn’t get the results at the end of games.”

Greater spending and international influence in MLS are pushing talented players into the USL Championship, raising the level of that league. Ramos arrives in Hartford believing that the USL is primed to take on a bigger role in developing American players both through its first teams and in its new academies.

“I think the USL is in a great spot,” Ramos said. “(Clubs) don’t have the huge expenses of MLS teams but do have great fan support. The academies are the next step. I see no reason why USL teams couldn’t continue to grow and create a huge business out of the development of players in their markets. ”

Ramos joins the likes of Landon Donovan, Conor Casey, and Cruz as former American players now leading USL Championship sides. In a league often known for giving coaching jobs to foreign managers, it’s a point of pride that a new wave of coaches is stepping into the American soccer fray.

“I love it, very proud of how hard American coaches work at being good in this business,” Ramos expounded. “American coaches are as knowledgeable as any coaches from around the world and maybe ahead of most because we live every day with a chip on our shoulder.”

It’s a coach and a chip Hartford Athletic is happy to have. A young club has added an American soccer legend respected as a coach. The USL Championship is a specific kind of challenge because of its budget constraints and wide range of playing conditions, but for Ramos, those things only make the job more intriguing and potential success more rewarding.