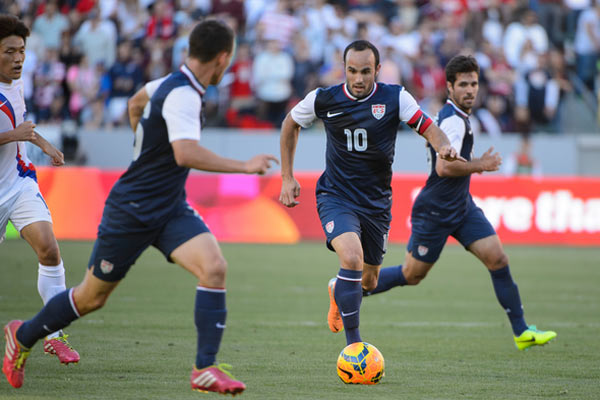 Hey, we all have to start somewhere. If you’re new to the game and just want the basics on how its played, you’re trying to understand what your kid is up to, or you want to know what you’re watching on TV, we’re here to help.

The Basics of Soccer

Since soccer is a global sport, it has a dictionary that might not be familiar to the American fan or player. Why do the British call uniforms ‘kits’ or cleats ‘boots’? What’s a 4-4-2 and how does that work? Why do people get so worked up about relegation? We’ll cover all those terms as simply as possible to give you a guide to understanding soccer. Here’s the easiest one. The reason it’s not normally called football here is to avoid confusion. Soccer, rugby, and American football all come from the same game. They’re codes on how to play it. Even the national governing body of soccer in this country once had ‘football’ in its official name and ‘soccer’ was the common term in England prior to the 1970s. Soccer Terms

To get a quick grasp on how the game is played, it’s worth considering A few basics. First off, unlike other sports where the rules change every season, soccer is very conservative. The rules of the game are called The Laws and can only be changed by a meeting of representatives from England, Scotland, Wales, and Northern Ireland. That makes changes rare and the rules fairly straightforward. You can get a pdf copy of the Laws of the Game from FIFA. What’s FIFA? It’s the international governing body for soccer that runs the World Cup. What’s the World Cup? That’s the biggest tournament in soccer that features 32 National Teams that qualify by region. We’ll get to the specifics in a bit. For now, let’s move onto the field.

Similar to baseball, there’s no set field dimensions. Instead, soccer uses minimums and maximums allowing fields to fit within those dimensions. The length has to be somewhere between 100 yards and 130 yards and the width between 50 and 100 yards. That’s a big difference, so the rules are tighter for international games. These top tier games need fields between 110 and 120 yards that are between 70 and 80 yards wide. Regardless of the overall size, the goal (8 feet high by 8 yards wide), the six-yard box immediately in front of the goal, and the 18-yard box all have to be exactly those dimensions.

Fortunately, most American NFL stadiums and college football stadiums can normally fit a regulation soccer field meeting the international standard. Some can’t, with modern NFL stadiums normally built with soccer in mind. Why? It’s very lucrative to host soccer games at NFL stadiums. One more thing, in soccer jargon, the field can be called the ‘pitch.’

At the highest level, the game lasts 90 minutes plus stoppage time. There are two halves of 45 minutes each and both end after stoppage time. What’s stoppage time? Since the clock doesn’t stop in soccer, the referee adds time back at the end of each half to make up for pauses in play. The referee indicates how much time gets added, but it’s not exact. That means a 90 minute game normally lasts 94 minutes or longer at the discretion of the referee. In soccer, players play until the referee blows the whistle.

There’s normally one referee on the field who controls the whistle and the cards. Cards? Yep, cards. In soccer, punishment is doled out through the referee raising a yellow or red card. A yellow card warns a player for breaking the rules. If the incident is serious, the referee can hold up a red card. That means the player has to leave the game for good, with his team unable to put in a sub. That’s called ‘playing a man down’ and it means the team plays with 10 instead of 11 players. Two yellow cards to the same player also equals a red and a sending off. A team can play with no less than 7 players on the field. If a foul happens in the 18-yard-box, the referee can award a penalty. That means the fouled team gets to take a kick directly at the goalkeeper from the penalty spot 12 yards from the center of the goal line.

Soccer balls come in sizes. A young player might use a size 3, increasing to size 4 as she or he gets older, and eventually using the regulation adult size 5 ball. Balls used to be made of leather, weren’t waterproof, and had laces. Imagine trying to kick that around on a wet field. the modern soccer ball is normally made with a plastic covering and is surprisingly light. 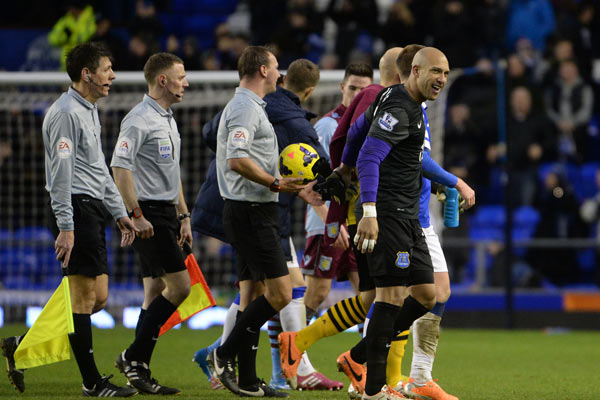 Soccer is roughly divided into four positions and we’ll go over each of them. Just remember that at the pro level there’s 11 players per side, with three substitutes allowed from the players on the bench. Once a player subs out, they’re done for the game.

Or goalie, the only player on the field allowed to use their hands when the ball is in play. The goalkeeper’s job is obvious. Using his or her entire body, they keep the ball from crossing the goal line so the other team doesn’t score. The goalkeeper cannot use their hands outside of the 18-yard box. Here’s our guide for youth coaches on goalkeepers that explains the basics of being a goalkeeper. One obvious question worth a quick answer. The goalkeeper always wears a different color shirt so he or she is easy to spot by the referee. Traditionally, that shirt was green.

Remember when we mentioned 4-4-2? That’s a basic soccer formation. You’ll notice it adds up to 10 rather than 11. That’s because there are 10 field players plus the goalkeeper. Formations only apply to field players since you have to have a goalkeeper. So we read the formation starting with the defender. The first 4 in the 4-4-2 means four defenders, the players in front of the goalkeeper. Do there always have to be 4? No. Other than the goalkeeper and needing 10 field players, those players can play in any formation the coach wants. Here’s more than you probably need to know at this point about arranging a soccer defense.

As you’d expect, these are the players in the middle of the formation, our second set of 4 in our 4-4-2. Midfielders take on attacking and defensive responsibilities, linking the defenders with the forwards and trying to keep the flow of play going. There’s more to it than that, but for now that’s what you need to know. Unlike American football, the positions aren’t set with complicated playbooks. Though the highest level of pro soccer can be described as high speed chess, it lacks the stops and starts of American football and doesn’t have the same type of positions. A midfielder can defend and a defender can attack.

The 2 in our 4-4-2 and the players most expected to score goals. From an offensive perspective, formations are designed to get the ball to the attacking players so they can do their job. Here’s an article on the 11 responsibilities of a soccer forward.

Now that we know a little bit about how the game is played, let’s take a look at what it means to play professionally. Unlike most sports, professional soccer has leagues all over the world. Under FIFA rules, most leagues have to be within a single country. Major League Soccer is an exception, allowed to field teams in the USA and Canada. England’s league also allows clubs from Wales.

There is no one major league like you’re used to in American pro sports. England’s Premier League is normally thought of as the best overall, but there isn’t a clear best when the world’s top players are in Spain, some of the world’s biggest clubs play in Italy, and a German club is normally in the running to become European champion.

How is there a champion of Europe when leagues are separated by country? FIFA controls world soccer, and beneath FIFA are six regional confederations. Those confederations have their own tournament to crown a regional champion. In Europe, that’s the Champions League. It’s the Champions League that’s the highest level of club competition, even though FIFA stages a Club World Cup.

The World Cup is every four years with FIFA choosing the host. Like the Olympics, hosting the World Cup is a major coup with countries bidding for the tournament years in advance.

So those are the basics, with links to articles that should give you a better understanding of soccer. Before you go, here’s our article on how to enjoy soccer on TV. It tells you what you need to know to get the most out of watching the games.