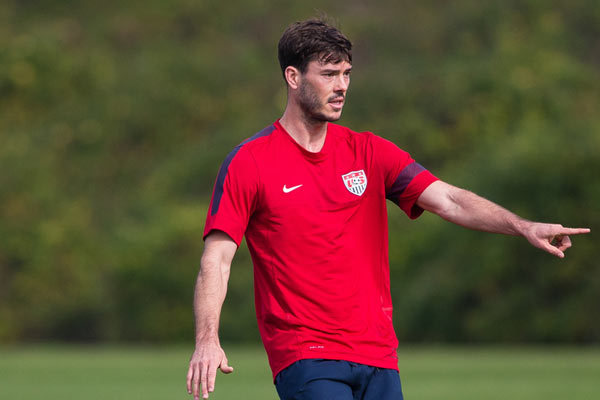 An offensive-minded midfielder, Brad became a regular at club level with Seattle and an MLS Cup winner with Columbus.  He was part of the Under-20 World Cup squad in 2005, where he played right back. Under USMNT coach Jurgen Klinsmann, Brad Evans quickly turned into a major player. By 2014, he was a regular in the squad and surprised nobody by making the USMNT 2014 World Cup roster. Evans moved to Sporting Kansas City for the 2018 MLS season, retiring on Dec 17.

2018: Joined Sporting Kansas City on Feb 20.
2018: Finished his career as a member of Sporting Kansas City.
2017: Once again finished runner-up with Seattle at MLS Cup.
2016: Supporters’ Shield winner with Seattle, finishing MLS Cup runner-up.
2015: Finished 4th in the West with Seattle, advancing to the conference semifinals.
2014: Played in 26 games with Seattle, winning the Supporters’ Shield and making the conference finals. Won the US Open Cup.
2013: Played in 24 games with the Sounders, scoring four goals and making the conference semifinals.
2012: Had 29 appearances with Seattle, making the Western Conference finals.
2011: Started 17 of 20 games and scored five times.
2010: Played in 12 games and scored once.
2009: Played in 27 games, starting 25 and scoring three goals.  Won the US Open Cup.
2008: Established himself as a regular with Columbus, winning the Supporters’ Shield and the MLS Cup.
2007: Joined the Columbus Crew where he played in four games. Left unprotected in the expansion draft where he was picked up by Seattle.

College: A four-year member of the UC-Irvine Anteaters, scoring 31 goals.