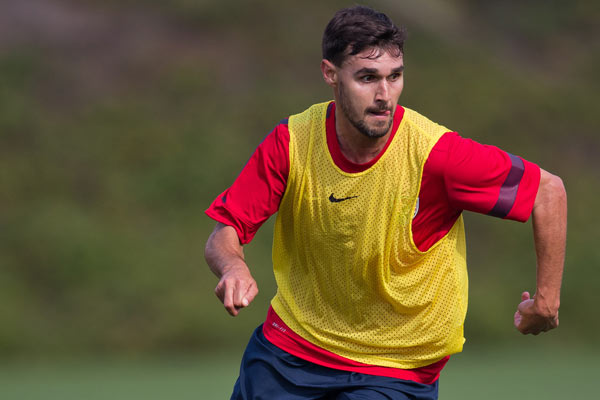 Chris Wondolowski is a USMNT player who broke through the MLS ranks as a member of the San Jose Earthquakes reserve team. It took Wondolowski nearly seven years before he emerged as one of the most-prolific scorers in the league. From 2006 to 2008, Wondolowski played for the Houston Dynamo.

In 2010, a year after he returned to the Quakes, Wondolowski had his breakout year. He won the Golden Boot after scoring 18 goals. The tally led to a National Team call up. Wondolowski was brought into January camp in 2011 and he made his National Team debut in a friendly against Chile. Wondolowski scored 16 goals in the 2011 season, upping that number to an MLS record-tying 27 in 2012. He scored his first goal with the senior squad in 2013. Wondolowski became the all-time MLS leading scorer on May 18, 2019. He announced his retirement at the end of the 2021 season, becoming a special assistant with the Earthquakes.

2021: Finished 8th-place with San Jose in his final season in MLS. Retired with the all-time goals record at 171 scoring in his final game.
2020: In what was planned as his final season, finished 8th with the Earthquakes advancing to the postseason. Opted to rejoin the club for 2021.
2019: Set the all-time goals scored record on May 18.
2018: Another season playing in all 34 games for San Jose, scoring 10 times and making the playoffs.
2017: In the lineup for all 34 regular season games scoring 13 goals. Made the playoffs and scored a goal.
2016: Played in 30 games scoring 12 goals for San Jose.
2015: Scored 16 goals in 31 appearances for San Jose.
2014: Finished out of the playoffs with the Earthquakes.
2013: Played in 29 games for the San Jose Earthquakes scoring 11 goals.
2012: Won the MLS Golden Boot by tying the all-time single season goal scoring record in MLS with 27.
2011: Scored 16 goals for San Jose. Named MLS Castrol Player Index of the Year.
2010: Won the Golden Boot as MLS top scorer with 18 goals.
2009: Returned to the San Jose Earthquakes.
2008: Made eight appearances in his final season with the Houston Dynamo.
2007: Appeared in 16 games and scored a goal with Houston.
2006: Moved with the team when it became the Houston Dynamo. Scored his first MLS goal in 2-2 tie against Chicago.
2005: San Jose Earthquakes’ leading scorer in reserve league. Appeared in two MLS games for first team.