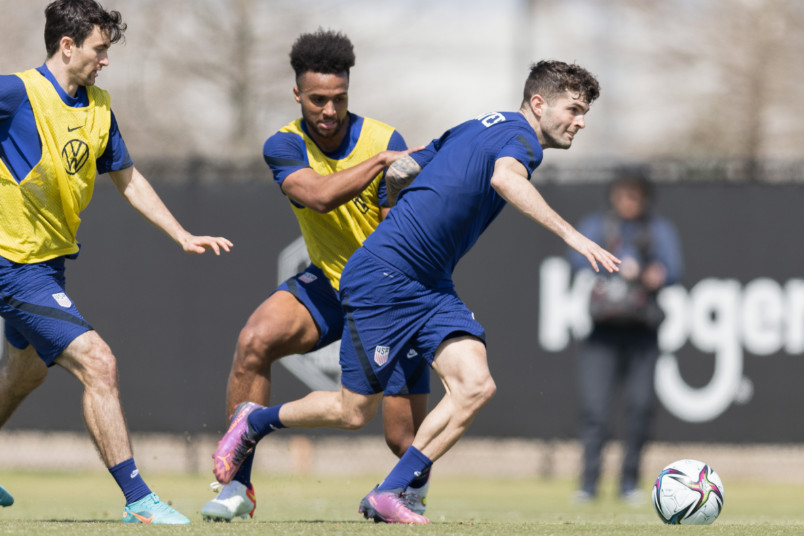 By Charles Boehm – MEXICO CITY (Mar 24, 2022) US Soccer Players – For decades, Estadio Azteca has been the immovable object for generation after generation of US soccer players and teams. Coaches come and go, names on the backs of the jerseys change. The two nations on either side of North America’s biggest rivalry evolve and, in many ways, grow more alike. But the results at this hulking, historic venue only rarely do.

While much has changed for the USMNT, World Cup qualifiers against Mexico’s skill and menace in Azteca’s thin, smoggy air remain the test of all tests in this part of the globe. The biggest hurdle in the quest for a place at the planet’s favorite tournament and a measuring stick. So it remains for Thursday’s Octagonal showdown with El Tri (CBS Sports – 10pm ET).

The US are 0-13-3 all-time in qualifying at this 56-year-old icon, “The Temple of Mexican Football,” and all three of those standings points were paid for dearly in blood, sweat, and tears. It’s been much the same for US clubs, too. Their Liga MX counterparts have inflicted one misery after another on them in Concacaf Champions League games there.

Gregg Berhalter and his squad know all about that. Some of them already lived it firsthand. Pile on the unhappy memories of the 2018 cycle’s ending, and some jitters are understandable, maybe inevitable.

“Our record here is horrendous,” said the coach and former USMNT defender in Wednesday’s press conference. “The odds are against us getting something out of this game, right? We know that, we realize that. And that’s just how it is. And we’re focused on going in and being difficult to play against, competing.”

“We were in a position to do it last time and we weren’t able to reach our goal,” said Christian Pulisic. “But this is a bunch of guys who are really just looking forward and a really hungry team who is going to give absolutely everything to make sure that we have a spot in the World Cup.”

Pulisic has been so influential on this era of the USMNT in so many ways, from his attacking qualities on the pitch to the teenage climb to the heights of European soccer that inspired so many to follow him. Like the program itself, he’s weathered some adversity since he made his senior international debut almost exactly six years ago. His searing emotions on that night in Couva, Trinidad reflected the hurt of an entire soccer nation that has since followed his career’s ups and downs like proud parents. He’s bounced back again and again, usually finding a new level in the process.
p><
“I remember answering this question before last cycle, and everyone was questioning and I’m not playing and this and that. And I was doing fine then and I’m doing fine now,” Pulisic said when asked about the effects of the ebbs and flows of his club season. “That’s that’s the beauty of this sport and this profession. I’m feeling very good and I feel in a good rhythm at the moment. And I’m really happy to now be back with the national team, really trying to help the team… I love this group of guys and I love this team.”

Visiting the Mexican capital for the first of their three enormous final 2022 qualifiers over the next week is not exactly a gift from the schedule. While the US is on course for one of the Ocho’s three automatic qualification slots for Qatar, plenty can turn sideways in the coming days. A rash of recent injuries sidelined several starters and the much-discussed matter of squad rotation is what we’ll politely call tricky. A rough night against El Tri could well destabilize everything. The USMNT says they’re not thinking about what might go wrong or what went wrong in the past.

“Now the mentality is incredible from the group. It really is,” said Paul Arriola, who helped the US earn a 1-1 draw in their 2017 visit to Azteca, on Monday. “The culture, the brotherhood that we have is something that I’ve always said, it’s even hard to find in club settings. So what we have, it’s special, and I know that we’re not going to let that slip away from us and understand how special this moment in this journey has been together. That’s really the difference.”

As much as this young side wants to herald a new day for the USMNT, it also has a unique chance to write the final chapter in a landmark ritual in the region’s soccer history.

With the two nations co-hosting with Canada in 2026, Thursday almost certainly marks the last US-Mexico qualifier for the next eight years or so. Looking beyond that, the expanded 48-team World Cup format figures to fundamentally change the nature of Concacaf qualifying. The region could potentially get as many as eight slots in the larger tournament, which seems likely to make the traditional giants’ path much less difficult and lower the stakes of future qualification battles. Berhalter acknowledged that on Wednesday.

“I think it was mentioned that this may be the last qualifier in Mexico between Mexico and the US and it’s just for us, it’s just a great event. We’re really happy and proud to be playing in this game,” he said. “We want to be really focused on this game and the guys, you could see when they came into camp, they’re really focused on this game. We have the big goal of qualifying but this is also a great opportunity for this group.”