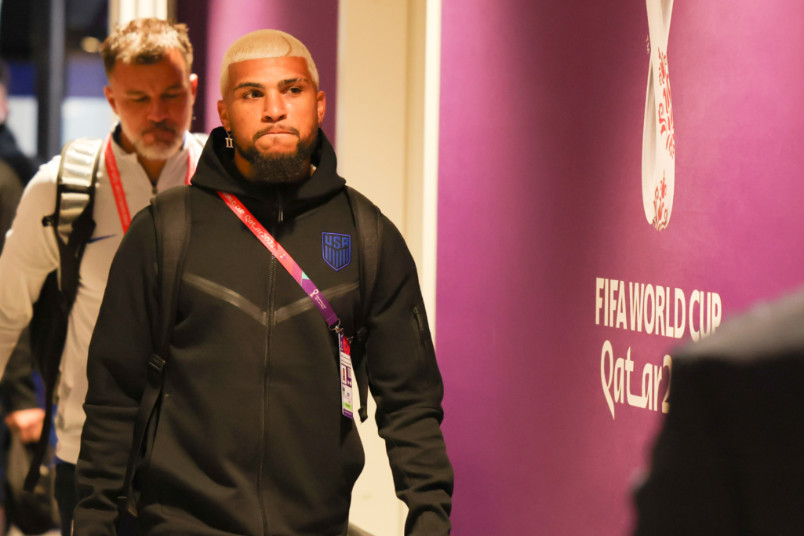 By Clemente Lisi – NEW YORK, NY (Nov 21, 2022) US Soccer Players – The USMNT is one of the youngest teams at this World Cup. It’s a data point we’ve heard again and again. It’s also a trait that can be a benefit at this World Cup, especially when it comes to fitness and dealing with the Qatari heat.

Following an eight-year absence, the United States returned to the World Cup on Monday, playing Wales to a hard-fought 1-1 draw. This is a talented US side, featuring goalkeeper Matt Turner, midfielder and team captain Tyler Adams, and strikers Christian Pulisic and Tim Weah, to name a few. This quartet, along with the other seven players in the US’s starting lineup against Wales, made their World Cup debuts.

The only one with any experience of this level on his resume is defender DeAndre Yedlin, a player whose inclusion by Berhalter highlights the importance of including a veteran with prior World Cup experience on the US’s 26-man roster.

“It’s been great to come in and be a leader on this team,” Yedlin told reporters last week at a news conference.

Many teams at this World Cup are relying on veterans to succeed. From favorites such as Argentina and Brazil to outsiders Uruguay and Costa Rica, there’s no doubt that World Cup experience on a roster is a positive. In a tournament where injuries have been such a big story line, having talent on the bench is a very good thing. Also having the chance to sub in five players, two more than at the last World Cup, means coaches have room to give plenty of guys minutes.

Berhalter did just that. Yedlin came in for Sergino Dest in the 74th minute. Like the US, Yedlin was back at the World Cup. It was in 2014 that Yedlin was a fresh-faced 20 year old when he was a member of the US squad that traveled to Brazil for the World Cup.

The Seattle native made his World Cup debut against Portugal during the group stage, coming off the bench. He would be subbed in against Germany and again versus Belgium in the round of 16. Yedlin’s explosive speed at right flank grabbed the attention of many clubs, especially with his ability as a wing back to cross balls into the box. He ultimately earned a move to Tottenham.

Berhalter played a similar role for the USMNT back in 2002 at the World Cup co-hosted by Japan and South Korea. It was during that tournament that Berhalter came off the bench to help the team, which ultimately reached the quarterfinals. It remains the US’s best World Cup finish since the inaugural edition in 1930, when the Americans placed third.

Yedlin has spent nearly a decade playing abroad. He went on to play for Sunderland in 2015 and Newcastle a year later, before joining Turkish club Galatasaray in 2021. Yedlin, now 29, returned to MLS earlier this year where he is a starter at Inter Miami.

While in Florida this past season, Yedlin has inspired his teammates to follow him in a self-help regimen that includes meditation and barefoot walks. It’s such rituals, which Yedlin told the Miami Herald is part of his “grounding,” that have also been integrated in the US’s training exercises at this World Cup.

Yedlin has been a major presence in the dressing room. After announcing the US roster earlier this month, Berhalter referred to Yedlin as “a glue guy.” The comment came when Berhalter was asked why Yedlin had been given a World Cup roster spot.

“He creates atmosphere for the team,” Berhalter added. “Sometimes he’s a shoulder to cry on or talk to, other times he’s a motivator.”

Yedlin, who has 75 caps and eight assists at senior level, said his teammates have peppered him with questions about his World Cup experiences, especially when it comes to how Brazil compares to Qatar as a host nation. His answer has been that Brazil involved flying across a large country between games and base camp, while Qatar’s smaller size cuts down on that.
Overall, Yedlin has embraced his role as a veteran.

“We’re such a close group,” he told reporters. “I really feel like they are my family, they are my brothers. So far, throughout this whole process, it has been really great with these guys.”

Yedlin has used the past to inform the present. At the 2014 World Cup, the US got points in its opening match against Ghana. That victory gave the Americans momentum and catapulted them to the knockout stage.

The US did come out strong against Wales, but ended with a point. The next big test will be Friday against England in a game that could very well decide the US’s fortunes at this World Cup.