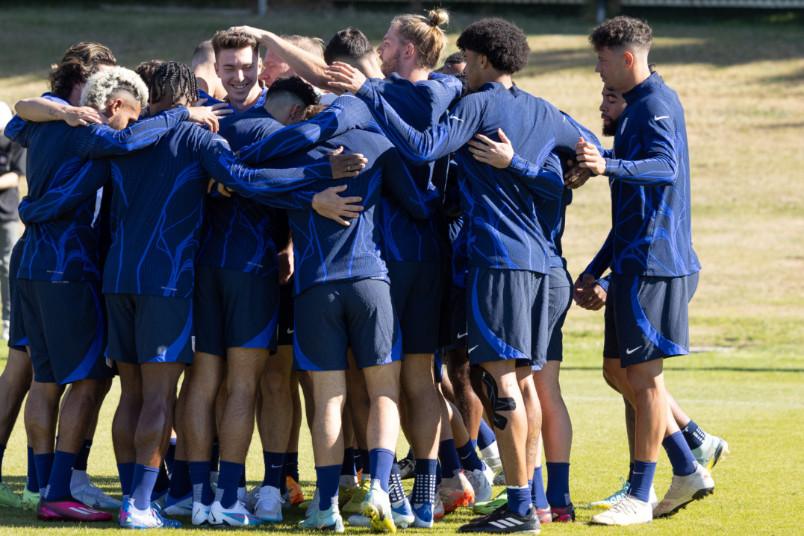 By Jason Davis – WASHINGTON, DC (Jan 25, 2023) US Soccer Players – The USMNT opens up its 2023 schedule against Serbia on Wednesday night at BMO Stadium in Los Angeles (10pm ET – HBO Max, Universo), a game that will serve both as a chance to highlight new talent entering the national team frame and as a kickoff for a cycle that will end with a home World Cup in 2026. The American men’s program hasn’t had a chance to power down post-tournament ahead of the launch of a new cycle. With the 2022 World Cup coming so late in the calendar year, there was no opportunity to play lower-stakes matches and contemplate the future while waiting for a new year to arrive.

Things are more complicated this time for the reasons listed above and for others. Assistant coach Anthony Hudson’s job in the year’s first match is to carry over into the new cycle some of the work done for the 2022 World Cup while integrating new players who have earned their chance to play for their country.

Serbia’s situation isn’t too dissimilar to that of the US, with the national team emerging from a World Cup and calling in new players for a match taking place outside of a FIFA international window. What is different for Serbia going into 2023 is the focus on qualification for a big tournament. Serbia begins its Euro 2024 qualifying schedule in March with matches against Lithuania and Montenegro.

The United States has plenty to work with from the last cycle in terms of approach. Despite the fresh-faced nature of the group called in, assistant coach Anthony Hudson has a group of veteran players in the squad to smooth the transition to the new cycle. Hudson’s 24-man roster presents several possibilities at most positions. With six substitutions available, Hudson can maximize the experience for most of the players called in.

At goalkeeper, veteran Sean Johnson is joined by FC Cincinnati player Roman Celentano and new Chelsea signing Gabriel Slonina. Walker Zimmerman and Aaron Long are the experienced options at center back. Jalen Neal and Sam Rogers are candidates to get their first senior caps. The team includes three left backs and one right-sided player in the fullback group. DeJuan Jones, John Tolkin, and Jonathan Gomez all play on the left with their clubs.

Julian Gressel, a player who attained American citizenship in November to become USMNT-eligible, is a right-sided option. Most often used as a wing back in a system with three center backs during his MLS years, he can also play as a fullback in a standard back four.

Midfield presents plenty of opportunity for American fans to see players from the rising generation of American talent. The group is a good mix of defensively stout players and players with a more attacking outlook.

Serbia’s 17-man roster doesn’t include a single player with senior-level international experience in the midfield and has only one player over 23. Despite a philosophy under Stojkovic that values the ball, they could have trouble controlling the midfield.

Kellyn Acosta can fill several roles in the midfield and is the most experienced player available. Portland Timber Eryk Williamson is back in the USMNT fold and like Acosta, can play several roles. He’s more often used as a box-to-box player for his club but can push higher up the field as necessary.

FC Dallas midfielder Paxton Pomykal plays in a 4-3-3 system under FCD boss (and former USMNT assistant) Nico Estevez as a box-to-box player who facilitates attacks by covering ground across the field. Of note: Pomykal is one of seven players in the squad with connections to FC Dallas, including Zimmerman, Acosta, and Gomez.

19-year-old Paxten Aaronson is a bright attacking prospect in the midfield group. Eintracht Frankfurt is excited about his future and released him to the USMNT camp despite not being required to do so. The wildcard in the midfield is Alan Soñora. A 24-year-old who has spent his entire professional career in Argentina, Soñora earned his chance with the USMNT via several productive attacking seasons with Independiente.

Hudson’s options for the forward line include veteran national teamer Paul Arriola and his FC Dallas teammate Jesus Ferreira. Ferreira brings World Cup experience at center forward while Arriola is a relentless two-way player with the second-most caps in the group. Matthew Hoppe is a natural center forward who played on the wing for the Americans in the past. San Jose Earthquakes attacker Cade Cowell has a cap and a promising future and will be a dynamic athletic force when on the field.

The other center forward is FC Cincinnati man Brandon Vazquez. Vazquez’s 18-goal season in MLS in 2022 and ability to play as a back-to-goal center forward make him an intriguing player for the national team going into the 2026 cycle.