Sean Johnson emerged on the USMNT scene after winning the starting goalkeeper job with the Chicago Fire. Johnson joined the Fire through the 2010 SuperDraft, selected 51st overall and quickly making other clubs wonder why he wasn’t picked sooner. Johnson played 13 times in his rookie season, taking the starting job in 2011. Following the 2016 season, he joined NYCFC. Johnson won the 2021 MLS Cup MVP award, making two saves in the shootout. In Jan, 2023 he joined Toronto as a free agent.

At USMNT level, Johnson had appearances with the U-20 and U-23 teams before winning his first full USMNT cap on Jan 22, 2011. He is currently one of the regulars for camp call ups with the USMNT, as well as playing in the 2013 Gold Cup. That appearance cap-tied Johnson to the USMNT. He was also eligible to represent Jamaica’s National Team. 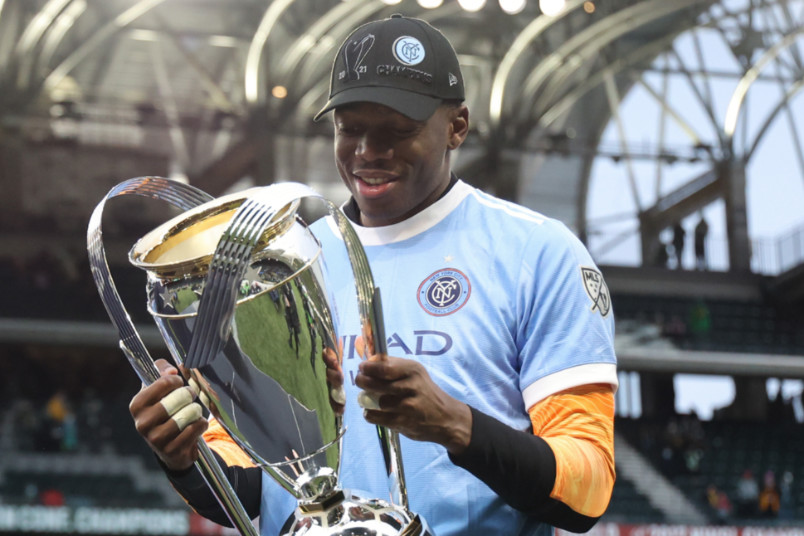 2023: Joined Toronto in January.
2022: Played in all 34 regular season games for New York, finishing 3rd and advancing to the Eastern Conference final.
2021: Finished 4th with NYCFC and won MLS Cup. Named MVP of the final.
2020: Exited in the first round of the playoffs with NYCFC.
2019: Won the Eastern Conference, exiting the playoffs in the semifinals.
2018: 3rd in the East and another trip to the semifinals.
2017: Finished 2nd in the Eastern Conference advancing to the semifinals.
2016: Another season in goal for a Fire team that once again fell short of the playoffs. Traded to NYCFC after the season ended in a deal that involved Atlanta United.
2015: Missed the playoffs with Chicago.
2014: A regular with the Fire.
2013: Played in 28 games.
2012: The regular in goal for Chicago with 31 starts.
2011: Stayed in the Fire starting lineup with 28 appearances.
2010: Drafted by Chicago in the 4th round of the SuperDraft. Played in 13 games his rookie season.