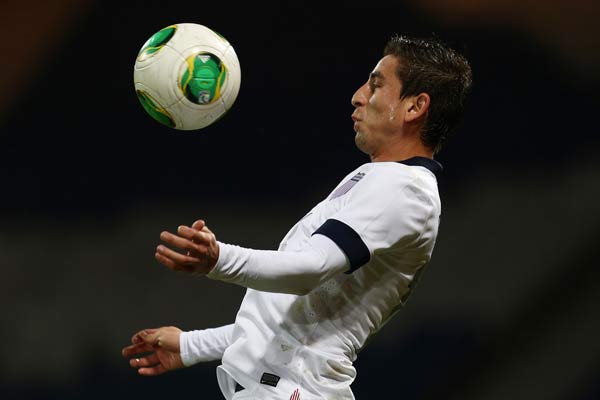 Alejandro Bedoya is a talented midfielder who followed Boston College teammate Charlie Davies’ career path and went from the NCAA to the Swedish Allsvenskan league and eventually the USMNT.  He has become a regular at club level, catching the attention of the USMNT coaching staff in 2010.

“I’m new to the National Team and the system they have. I’m just trying to learn the system and get some experience along the way. I have to play my game and try to bring what I can do to the table. I enjoy training with these guys and learning from them. It’s been fun.” from 10 Questions With Alejandro Bedoya

Bedoya joined fellow US National Teamers Carlos Bocanegra and Maurice Edu at Rangers in the Scottish Premier League, but that club’s administrative relegation led Bedoya to Helsingborgs. After a season in Sweden, he joined Ligue 1 club Nantes. In August 2016, Bedoya transferred to Philadelphia.

2019: 32 games, finishing 5th and making it to the conference semifinals.
2018: Missed one regular season game, finishing 6th and exiting in the knockout round.
2017: Missed the playoffs with the Union, playing in 28 games.
2015-16: Finished 14th with Nantes. Left Nantes for Philadelphia in Aug 2016.
2014-15: Played in 28 games scoring three goals, finishing in 14th-place with Nantes.
2013-14: Signed with Nantes in France’s Ligue 1. Finished 13th.
2013: Played in 12 games with Helsingborgs scoring 5 goals and finishing 5th in the Allsvenskan.
2012: 9 games for Helsingborgs finishing 6th in the Allsvenskan.
2011-12: Signed a deal to leave Orebro for Rangers in January 2012. That was moved up, with Bedoya moving to the SPL team on Aug 17th, 2011. Joined Helsingborg for the end of the 2012 Swedish season, signing a short-term deal at the end of the season.
2010: Regular for Orebro, with the club finishing 3rd in the Allsvensken and qualifying for the Europa League.
2008-09: Signed with Sweden’s Orebro out of college. He made 25 appearances and scored three goals in his first season with the club.

College: Played his Freshman and Sophomore seasons at Farleigh Dickinson before transferring to Boston College. Won a high school state championship in Florida.