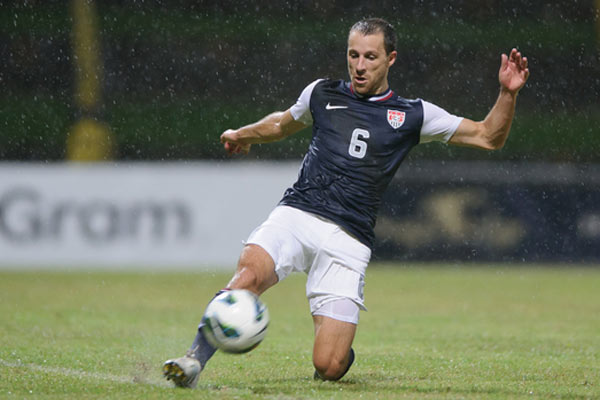 One of the most talented defenders to ever wear the USA shirt, Steve Cherundolo possesses good man-marking ability and passing skills and can be deadly on restarts.  A right-sided defender for both club and country, he has become a consistent regular at right back for the first choice National Team.  Honored by his club side Hannover by being named deputy captain. His goal against Germany on March 22, 2006, from 70-yards is considered to be the longest strike in US history. His second goal came as the goal winner in South Africa in late 2007 as the US won 1-0 to take the Nelson Mandela Challenge Cup.

In 2009-10, he was part of the Hannover squad that recovered from tragedy to maintain their Bundesliga status on the last day of the season. Immediately improving, Hannover qualified for two consecutive Europa Leagues with Cherundolo as captain. Steve now holds the record for most Bundesliga games played by any player in Hannover history.

Cherundolo retired on Mar 19, 2014, taking the assistant coaching role with Hannover’s reserve team. On Apr 20, 2015 the club announced Cherundolo will serve as assistant coach with the first team. Cherundolo later took over the U-17s before moving to Stuttgart as an assistant first team coach from January, 2018 through October 2019. He moved to the United States in 2021 as the coach of the Las Vegas Lights. In January, 2022 he became the coach of LAFC in MLS.

2012: Started against Italy on Feb 29th and was Klinsmann’s regular right back through the May and June friendlies and June World Cup Qualifiers. Started against Jamaica on Sept 11th.
2011: Named to the Gold Cup squad and was a regular in that squad starting in the final on June 25th.
2010: Named to the US World Cup squad.  Started all four games in South Africa
2009: Captained the United States during the group stage of the Gold Cup before returning to Germany to start preseason training with his club.  Started against Mexico on Aug 12th.  Played in both of the October Qualifiers.
2007: Played in the March 25 friendly against Ecuador.  Rejoined the team for the game in Sweden on August 22 and the friendly against Brazil in Chicago on September 9.  Scored game winner against South Africa in November.
2006: Played in seven games, including all three games at the 2006 World Cup.  Scored his first international goal on March 22 versus Germany from behind midfield.
2005: A regular call-up during the 2005 World Cup Qualifying campaign.
2004: Played six games, started five.  Recorded his first World Cup Qualifying assist against El Salvador on Sept. 4.
2003: Started all five games he played for the US including twice at the Confederations Cup.
2002: Played 71 minutes in friendly against Germany and named as alternate to World Cup squad.
2001: Appeared eight times for the national team, including starts in seven World Cup Qualifiers.
1999: Played the full 90 minutes in his debut with the US in a 2-2 draw with Jamaica.
1999: Co-captained the US Under-20 national team to an 11th-place finish at the World Youth Championship in Nigeria.
1997: Captained the US Under-18 team in four games.

2012-13: Advanced to the Round of 32 in the Europa League and finished 9th in the Bundesliga.
2011-12: Advanced to the quarterfinals of the Europa League with Hannover finishing 7th in the Bundesliga.
2010-11: Key part of the Hamburg team that shocked critics by spending most of the season near the top of the table and qualifying for Europe.
2009-10: Part of a Hamburg squad that fought back from the death of their goalkeeper to keep their place in the Bundesliga.
2008-09: Injuries limited his games to 13, and his season ended early due to hip surgery.
2007-08: Retained his starting spot in the Hannover defense at the start of a new Bundesliga campaign as Hannover challenged for a top six position.
2006-07: Remained a starter during a season that saw a coaching shuffle amid a run of poor results.  Helped turn Hannover’s season around, finishing in the top half of the Bundesliga.
2005-06: Recovery from the sprained MCL delayed his debut in the 2005-06 lineup, and injuries to his knee and calf limited his availability for the first half of the season.
2004-05: Voted vice-captain by his teammates.  Scored three goals during the season, appearing in all but one match all year. Hannover reached as high as fourth in the League table at one point, their best position ever.
2003-04: Played 33 games, scoring one goal.
2002-03: Started 33 games for Hannover with three assists; missed only game due to a yellow card accumulation suspension.
2001-02: Started 30 of 34 games for Hannover and scored the game-winning goal in a 6-1 rout of SV Babelsberg.
2000: Established himself as a starter with Hannover before suffering a season-ending injury.
1999: Signed with Hannover 96 of Germany after his sophomore season at Portland and started four games.

College:  Steve was named West Coast Conference Freshman of the Year following his first year at the University of Portland.  Played for Mount Carmel High School and the La Jolla Nomads.