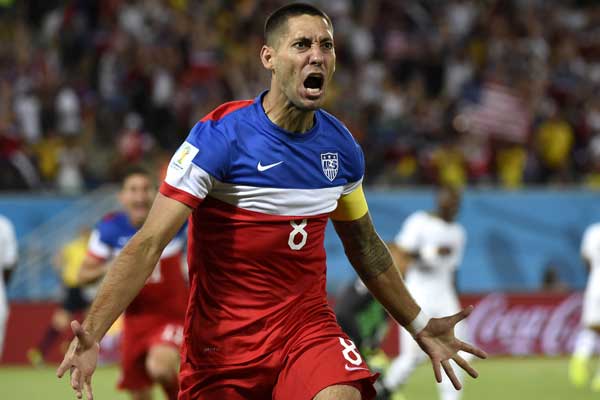 One of the marquee names on the USMNT, Clint Dempsey was the New England Revolution’s top draft choice in the 2004 MLS SuperDraft. Dempsey is an extremely confident and capable player. Dempsey is composed and skillful on the ball and excellent in traffic. Something he has now proven on both sides of the Atlantic after a transfer to the English Premier League’s Fulham in 2007.

Dempsey came on strong in 2005 to continually earn call-ups to the USMNT, which resulted in his selection to the World Cup team in 2006. He was part of the U-20s, but made his impression on the USMNT coaching staff with a spectacular rookie season with the New England Revolution in which he scored seven goals.

Dempsey left the Revolution after three seasons and 71 career games when he was signed by Fulham during the transfer window in January 2007. In that time, the three-time MLS All-Star scored 25 goals and registered 14 assists in leading his side to two consecutive MLS Cup title games in 2005 and 2006.

The skillful midfielder/forward made his debut for Fulham on January 20, 2007, in a 1-1 tie with Tottenham. A folk hero for the club for scoring the goal that kept them in the Premier League, Dempsey is now an established starter with Fulham.  He scored a wonder goal to see off Juventus in the Europa League, with Fulham advancing to the final.

At USMNT level, he was a crucial part of the squad that reached the knockout round of the 2010 World Cup.  That capped a strong run of form for Dempsey on South African soil, helping push the USA to an unlikely spot in the Confederations Cup final the year before.  Dempsey won the Player of the Year awards presented independently by US Soccer and Futbol De Primera three times, including back-to-back in 2011 and 2012. Dempsey took over the captain’s armband for the United States in the May/June 2013 friendlies and World Cup Qualifying. He returned to MLS in August 2013 as a member of the Seattle Sounders. Dempsey announced his retirement on August 29, 2018. He currently works as a commentator for CBS Sports. Dempsey is a member of the National Soccer Hall of Fame class of 2022.

2018: Announced his retirement on Aug 29 after playing in 14 games for Seattle.
2017: Returned to Seattle, playing in 29 games and winning MLS Comeback Player of the Year. Made the MLS Cup final.
2016: A key part of Seattle’s championship run, missing the playoffs due to a heart issue.
2015: Finished 4th in the West, making the conference semifinals.
2014: Loaned to Fulham for Jan-Feb. Won the Supporters’ Shield in his first full season with the Seattle Sounders, playing in 26 games and scoring 15 goals.
2012-13: Transferred to Spurs on Aug 31st, 2012. Made 28 appearances, scoring seven times for the 5th-place club. Transferred to Seattle in August, 2013.
2011-12: Finished a remarkable season with Fulham as the club’s most dangerous offensive player.  Again voted Player of the Season and again led the team in scoring.
2010-11: Voted Player of the Season for Fulham, becoming their career leader in Premier League goals scored.
2009-10: Strong play after recovering from injury, both in the Premier League and Europa League.  Part of the runners-up Europa League squad, Fulham’s first major final in the club’s history.
2008-09: A regular with Fulham, considered one of the best players on the squad.
2007-08: Used by Fulham as a striker following injury to Brian McBride. Signed an extension with Fulham after helping them stay in the Premier League for the second season in a row.
2007: Transferred to Fulham where he joined fellow US internationals Carlos Bocanegra and Brian McBride.  Scored equalising goal against Liverpool that helped keep Fulham in the Premier League.  Started 2007-08 season with two goals, one in 3-3 tie with Tottenham, the second in 1-1 tie with Wigan.
2006: Scored eight goals and registered four assists in 21 games for the Revolution to help lead them to the MLS Cup title game against Houston. Rehab from injury confined him to a sub’s appearance.
2005: Posted 10 goals and nine assists in 26 games, good for second best on the team scoring charts.  Named to the MLS Best XI and started the MLS All-Star game. Chosen as MLS Player of the Month in April after scoring four goals and adding three assists in five games.
2004: Was a first round selection for the Revolution in the 2004 MLS SuperDraft. Rookie season went very well.  First career start was on April 17 against San Jose.  Scored the first goal of his MLS career against the MetroStars on April 25. Registered seven goals and one assist on the season.

Youth and college: A three-year star at Furman at midfield and forward, Dempsey finished in the top four on his squad in scoring in each of his three years for the Paladins, finishing with 17 goals and 19 assists for 53 points in 62 games. During his time at Furman, he helped lead his team to a pair of Southern Conference titles and two NCAA Tournament appearances, including a berth in the third round in 2002 and a top 10 National ranking. He was selected to the NSCAA Second Team All-America squad in 2002 and was an All-Southern Conference selection all three years. A two-time NSCAA All-South region choice.