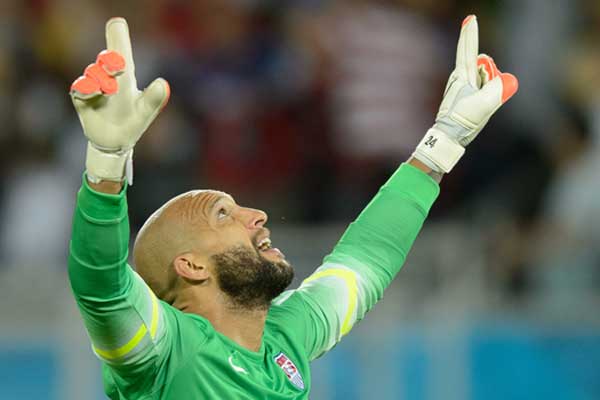 Tim Howard emerged as the heir to the legacy of Kasey Keller and Brad Friedel as USMNT goalkeepers who have made their mark in England.  As exciting as a goalkeeper can be, Tim was named a 2001 MLS All-Star on the strength of some scintillating shot-stopping between the posts.  After kicking off his MLS career as a reserve with his hometown MetroStars as a Project-40 allocation, Howard emerged as the hands-down starter by 2001. In a three-year-span he emerged as the finest goalkeeper in Major League Soccer, which caught the eyes of scouts at Manchester United.

His move to Manchester United in the summer of 2003 was a major story around the world, and only grew as he went on to lead his side to Charity Shield and FA Cup titles.  Along the way, his standout performances earned him Goalkeeper of the Year honors in the English Premier League.

After on-and-off duty for Sir Alex Ferguson during the 2004-05 and 2005-06 seasons, Howard moved to Everton FC on a season-long loan deal in the spring of 2006.  Midway through the 2006-07 season, Howard earned a permanent transfer to Everton and signed a five-year deal through 2012.  Stayed as Everton’s regular number one through the 2015-16 Premier League season, Howard joined the Colorado Rapids during the 2016 summer transfer window. Howard announced his retirement from MLS following the 2019 season, but returned with second division Memphis for 2020. Howard is part owner of the USL Championship club.

2020: Announced he would play for Memphis in the USL Championship.
2019: Announced that this would be his final season in pro soccer, finishing in 9th-place in the West.
2018: 33 games for Colorado finishing in 11th-place and exiting the Concacaf Champions League in the first round.
2017: Made 25 appearances with the Rapids, finishing 10th.
2015-16: Announced in March 2016 that he would be joining the Colorado Rapids during the summer. Finished 11th with Everton. Made the playoffs with the Rapids.
2014-15: Played in 32 games with Everton finishing 11th in the Premier League.
2013-14: Finished 5th with Everton in the Premier League. Signed a new contract.
2012-13: Just missed setting Everton’s consecutive appearance record due to a late season injury. Everton finished 6th in the Premier League.
2011-12: Everton’s #1, finished 7th.
2010-11: Facing competition for the starting spot at Everton, Tim held onto the gloves and continued to turn in a string of solid performances.
2009-10: Regular starter with Everton, finishing 8th.
2008-09: Became the youngest Everton keeper to reach 100 caps, leading the club to a Europa Cup spot and a day out at Wembley in the FA Cup Final loss to Chelsea.
2007-08: Made strong start to the new season, with Everton challenging for a place in the Premier League top five. Allowed just 16 goals in the team’s first 14 games.
2006-07: Made a move to Everton FC on loan from Manchester United, which became permanent in February ’07. Made 38 appearances as Everton finished sixth, qualifying for the UEFA Cup.
2005-06: Deputized to Dutch international Edwin van der Sar for much of the 2005-06 season, his first team appearances mainly limited to domestic cup competitions.
2004-05: Played first nine games with Manchester United, but saw only sporadic action throughout the remainder of the season.
2003-04: In only his first season with one of Europe’s biggest clubs, he won the Charity Shield and FA Cup, and was named Goalkeeper of the Year in England.
2003: Signed four-year contract with Manchester United of the English Premier League.  Was 6-3-4 in 13 games with the MetroStars, with 1.33 GAA and three shutouts.
2002: Trained with Dutch club Feyenoord for two weeks after season.  Won 11 of 27 games with a 1.61 GAA for MetroStars.
2001: Named MLS Aquafina Goalkeeper of the Year as well as NY Life’s Humanitarian of the Year for his work with charities supporting Tourette Syndrome.
2001: Was named an MLS All-Star for the 2001 season after earning the full-time starting job with the MetroStars.
2000: In a breakout season, Howard played 794 minutes, recorded nine starts and logged an impressive 1.59 goals against average.
1998: Signed with NY/NJ Metrostars in MLS.  After spending most of the year as a backup, made his first MLS appearance on August 18 in a 4-1 win over the Colorado Rapids.
1997: Joined the USISL’s North Jersey Imperials.