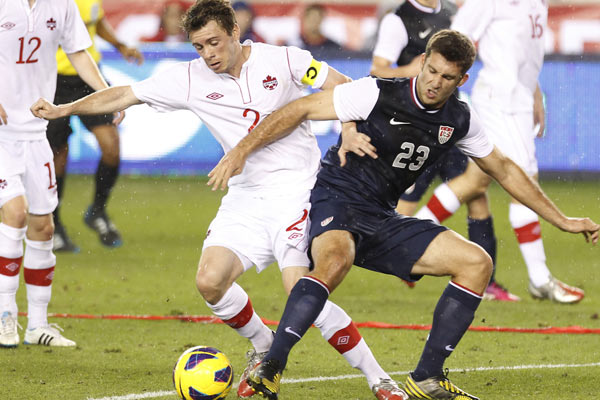 Justin Morrow got his first look with the senior USMNT squad as part of the 2013 January camp after impressing with the San Jose Earthquakes. Drafted by the Earthquakes in 2010, Morrow eventually established himself with the club and winning a place on the MLS All-Star Team in 2012. Morrow followed that season up with the January camp in 2013, making his USMNT debut against Canada on Jan 29. Morrow joined Toronto FC following the 2013 MLS season.

2018: Started the Jan 28 friendly against Bosnia and Herzegovina.
2017: Started against Martinique on Jun 12.
2013: Called into the January USMNT camp and started against Canada on Jan 29. An unused substitute against Costa Rica on Mar 22 and Mexico on Mar 26.

2019: 28 games with Toronto, advancing to the Eastern Conference finals.
2018: Played in 21 games with Toronto.
2017: Won the MLS Cup, Supporters’ Shield, and Canadian Championship with Toronto.
2016: Advanced to MLS Cup.
2015: Made the playoffs for the first time in club history.
2014: Missed the playoffs with Toronto.
2013: Played in 26 games starting 21 for the Earthquakes. Traded to Toronto FC after the season over salary cap concerns.
2012: 33 starts in a Supporters’ Shield winning season with San Jose.
2011: 9 games for San Jose, all starts and another loan to FC Tampa where he played 2 games.
2010: Drafted in the 2nd round of the SuperDraft, 28th overall by the San Jose Earthquakes. Played in three games his rookie season. Played in 5 games on loan to FC Tampa.

High School and College: Played in 89 games over four seasons with Notre Dame and was team captain his senior year of college. An NSCAA All-American at Saint Ignatius High School.