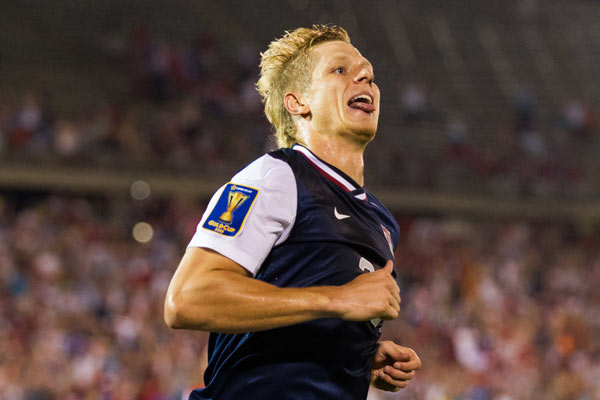 Brek Shea made his debut for the senior squad in 2010, building on the work he’d done as a member of US Soccer youth teams and with FC Dallas. His size and eye for goal make him a valuable part of the attack, usually setup as a winger. That hasn’t stopped his club coach from using him as a defender, a role he played at the start fo the 2011 season in Dallas.  A fan favorite not only for his inspired play but ever changing hair style, Brek is a noteable artist who has sold several paintings.  He won the US Soccer Federation’s Young Player of the Year award for 2011. In 2013, Brek transferred to England’s Premier League joining Stoke City. He returned to MLS with Orlando City for the 2015 season. He was traded to Vancouver before the start of the 2017 season. Shea moved to Atlanta for 2019, joining Inter Miami in 2020.

2020: Signed with Inter Miami in June.
2019: Joined Atlanta United, advancing to the conference finals after winning the East. Played in 19 games.
2018: 28 games and three goals with Vancouver, missing the playoffs.
2017: Traded to Vancouver on Feb 25, playing in 25 games and scoring four goals  finishing 3rd and advancing to the Western Conference semifinals.
2016: Part of an Orlando City squad that finished 8th in the Eastern Conference.
2014-15: Loaned to Birmingham City. Transferred to Orlando City on Dec 19, 2014. Played in 19 games for Orlando in their debut season in MLS.
2013-14: Second season with Stoke City. Went on loan to Barnsley early in 2014, playing 8 games in the Championship.
2012-13: Signed with Stoke City in January 2013. Played in two games in his first Premier League season.
2012: Played in 21 games scoring 3 goals with Dallas.
2011: Team MVP, with 11 goals.  His strong season led to an invitation to train with Premier League club Arsenal amid interest from overseas clubs.
2010: Established himself as a regular and won the MLS Cup in a season where he started 21 of 25 games and scored five goals.
2009: Started seven out of 19 games played for Dallas.
2008: Signed with FC Dallas as a Generation adidas player and played two games in a rookie season that ended with a September injury.